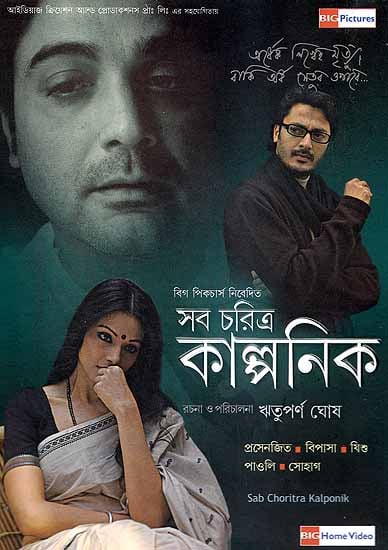 Sab Choritra Kalponik (All Characters are Imaginary): Story of the Transformation of a Woman from A Discontended Wife to a Widow Engrossed in the Memories of Her Husband (Bengali Film DVD with English Subtitles)

The storyline of Sab Choritra Kolponic revolves around Radhika (Bipasha Basu) and Indraneel (Prosenjit) positioned within flashback and contemporary times simultaneously. Radhika and Indraneel are two ideal human beings but do not share a good bonding. This is because of their upbringing to two entirely different environments, completely different mind sets, language differences, ideology mismatch, etc. and this encourages Radhika to patronize the idea of divorcing Indraneel and marrying Shekhar (Jisshu Sengupta), her colleague and boyfriend. But then the movie, takes a different turn and Radhika, who is in Jamshedpur, learns that her husband, Indraneel (in Kolkata) has passed away because of a cardiac arrest. Radhika feels her world going upside down and she immediately storms back to their home in Kolkata. There on seeing the garlanded picture of Indraneel, house decorated with flowers, and Indraneels dead body, Radhika is drowned in the memories of yester years. How both of them got married. Then they came to Kolkata and her return to Jamshedpur. Indraneel was a well known poet and has won a prestigious literary award before his death. A function is arranged to pay tribute to the great poet. There, when several poets read Indranee Is poems, to her surprise Radhika Discovers that all His poems only talked about their relationship and their memories as husband and wife and nothing else. She feels Indraneel is still with her mentally and emotionally if not physically. Once again Radhika gets engrossed in her memories, her relationship with Indraneel and their good and bad times they had shared. The film is all about Radhika’s journey as a wife and her transformation as Indraneel’s widow.