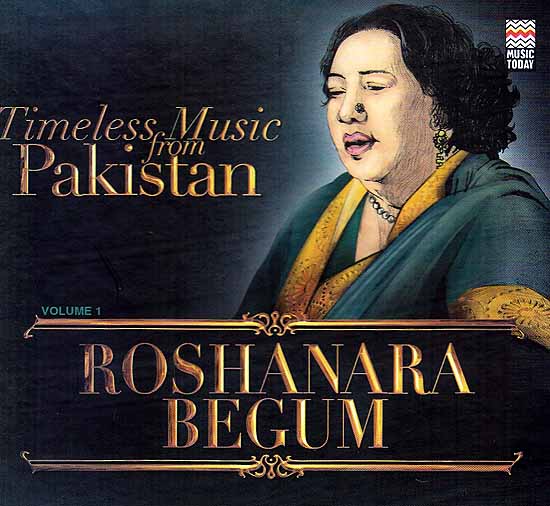 FREE Delivery
$28
Quantity
Ships in 1-3 days
Notify me when this item is available
About the Artiste
<`p> Roshan Ara Begum was hailed as the greatest doyen of Kirana gharana in undivided India. Born in Calcutta in 1917 she moved to Lahore in 1948. However her tryst with Lahore began early in her teens when she visited the city often to participate in musical baithaks organized and held at the affluent residences of Chun Peer in Mohalla Peer Gillaanian at Mochi Gate. During these visits she also broadcast songs from the then All India Radio Station where her name was announced as Bombayali Roshan Ara Begum as she had shifted base to Bombay in the late 1930s to live near Ustad Abdul Karim Khan from whom she took lessons in Hindustani classical music for fifteen years.

By the 1940s her performances had already started creating a buzz as she regaled connoisseurs with her spellbinding renditions.

Her rich voice had a maturity about it that always left the listeners amazed and her vocal dexterity in rendering intricate taan patterns gained her immense respect among listeners and critics alike. She developed a unique style which was a perfect blend of her full throated voice and her training. Her renditions reflected her Ustad’s style be it the elaboration of a raga through alaap or the delivery of taan-s she peaked in her career between 1945 and 1982.

Post partition Roshan Ara Begum Settled in Lalamusa in Pakistan from where she traveled for performances.

Even as far back as then she flirted with Bollywood and sang for composers as Anil Biswas, Feroze Nizami and Tassaduq Hussain lending her voice for movies such as Pahali Nazar (1945), Jugnu (1947), Qismat (1956), Roopmati Baazbahadur (1960) and Neela Parbat.

(1969) On December 6, 1982 this great legend passed away leaving the world of music reverberating with her voice which is etched in time.

This album is a celebration of the legendary Mallika-e-Mauseeqi Roshanara Begum who has been an outstanding phenomenon in the history of classical music and one of the greatest exponents of the Kirana gharana style of singing form Pakistan.

This series presents unsurpassed legends of classical and Semi classical music who mastered the art through their exceptional vocal abilities. It is an attempt to celebrate the glorious journey of some such legends including Roshanara Begum Ustad Salamat Ali Khan Ustad Fateh Ali Khan, Ustad Umrao Bundu Khan, Ustad Ghulam Hassan Shagan Khan and Ustad Amanat Ali Khan. These artistes have made a monumental contribution in popularizing classical music making way for all future generation to tread the path of artistic brilliance and honor.