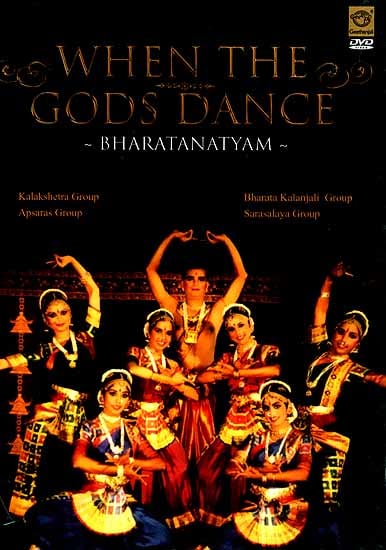 $27.50
Quantity
Notify me when this item is available
From the CD:

Kalakshetra group including Janardhanan, Balagopal (Bharatanatyam)
Apsaras (Bharatanatyam)
From the traditional dance dramas to more recent dance ballets When The Gods dance gives you a kaleidoscope view of the Indian dance scene today. This episode features one group from India and one from Singapore.
Choodamani Pradanam, a very popular dance drama from Kalakshetra, choreographed by the pioneer Smt. Rukmani Devi arundale features veterans Shri Balagopal and Shri Janardhanan in the lead roles of Hanuman and Ravan. It is the canto of Ramayana where Hanuman meets Sita in Ashokavanam. Smt Neila Satyalingam a familiar name in the dance world of Singapore, a student of kalakshetra, has a well estsblished dance school apsaras in Singapore. The apsaras group performs a small extract from Ritu mahatmayam about the different seasons. Music for this is composed by the renowned danseuse Dr. Padma subrahmaniam and dance is choreographed by Smt Neila satyalingam herself.

Bharata Kalanjali group including V.P.Dhananjeyan (Bharatanatyam)
Sarasalaya group including Srekala Bharath (Bharatanatyam)
This episode feature two groups both highlighting the Nritta elements of dance. The first is a dance number performed by students of Sarasalaya and the second in by Shri V.P.Dhananjeyan’s troupe. With over 500 arangetrams to her credit, Smt. K.J.Sarasa is a recipient of many an honors including the all India sangeet natak academy award. Students of her dance school Sarasalaya, perform to Sarasa’s choreography of Thanjavoor Shankara Iyer's "Mahadeva Siva shambo". The episode also features a visit to Bharata kalanjali an art school run by the Dhananjeyans. After a brief conversation with them, we move on to a scene from their dance drama Sangamitra, on the life of King Ashoka. Choreographed to represent a group of courtesans performing to the great king in the royal courts, Sangamitra features Shri V.P.Dhananjeyan as king Ashoka.