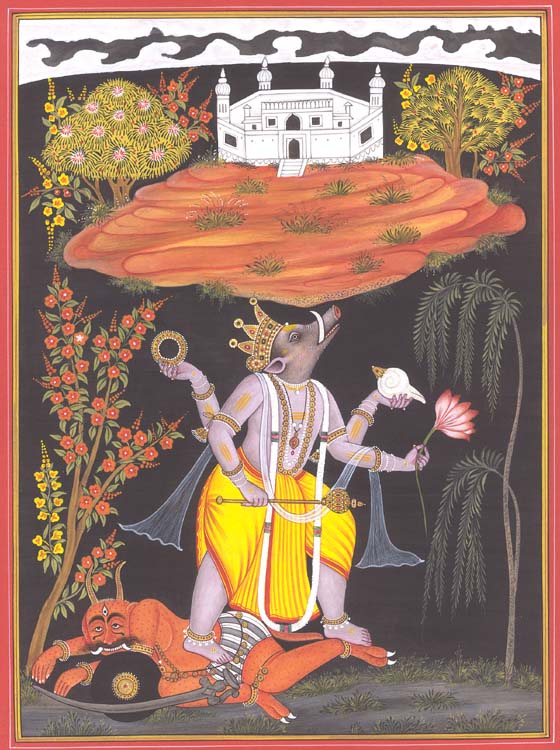 $160.00
This item can be backordered
Time required to recreate this artwork
6 to 8 weeks
Advance to be paid now
$32.00 (20%)
Balance to be paid once product is ready
$128.00
Notify me when this item is available
Save to Wishlist Send as E-card Share by Email
The Bhagvata Purana says that "with the purpose of protecting the earth, priests, gods, saints and the scriptures, and righteousness and prosperity, the Lord takes a body." The first few incarnations of Vishnu were in animal forms and each one equally meaningful. In his third avatara Vishnu descended in the form of a boar (Varaha). The golden eyed demon Hiranyaksha had thrown the earth to the bottom of the sea. There was hue and cry and pleadings from the earthlings who had submerged under the ocean. Vishnu as Varaha dived into the waters, killed the demon and raising the earth on its tusk, rescued it.

In this painting, the defeated demon, with fangs and horns, looks exhausted more than ferocious. Is it the same demon who had terrorized the earth? On his body stands the victorious Varaha (Vishnu) with all the attributes associated with Vishnu. On his tusk rests the rescued earth. This painting is appreciated for using vertical and horizontal planes in harmony without jarring the composition. The lower half is horizontal, gradually shifting to vertical as it goes up and then again merges into horizontal elements. It also uses bright and muted colours judiciously without disturbing the aesthetic appeal of the painting.