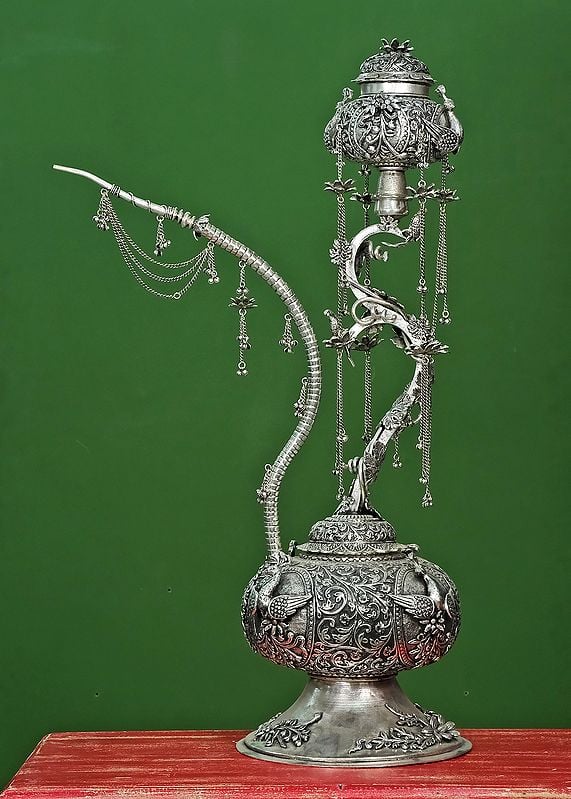 While there are a lot of claims about Hookah, the exotic vaping device being Persian in its origin, we can without a doubt say that in making it a synonym of a luxurious and regal lifestyle, India has a prominent role. According to some sources, Hookah or waterpipe was invented by emperor Akbar’s physician, a Persian, Abu-Fatah Gilani. From Mughal paintings of the members of the royalty to the veranda in the traditional homes, Hookah has traveled a long way, all the while staying an important part of the West’s image of the Exotic East.

The silver-toned body of the antique copper hookah we have here is the prime example of art that is discernible in every aspect of India and its crafts. The entire body of the hookah has different embellishments used artistically that highlight the richness of the history of this marvelous vaping device.

The hookah bowl or uppermost part is decorated with beautiful peacocks, flowers, and strings with ghungroo (tiny bells). Attached to the bowl is the part called the stem, designed like the stem of a plant, pleasingly curving at regular intervals. The vase, the lowermost portion of the hookah is also decorated with floral motifs and peacocks which appear to have taken a seat on the flowering vines on the pot. The pipe is a delicate component, charmingly adorned with chains and ghungroos, adding a gentle beauty to the Hookah. With this silvery craftwork in your space, you will certainly relive the days of royalty. 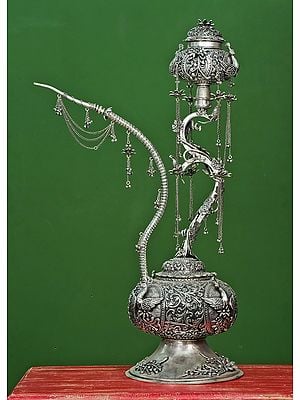