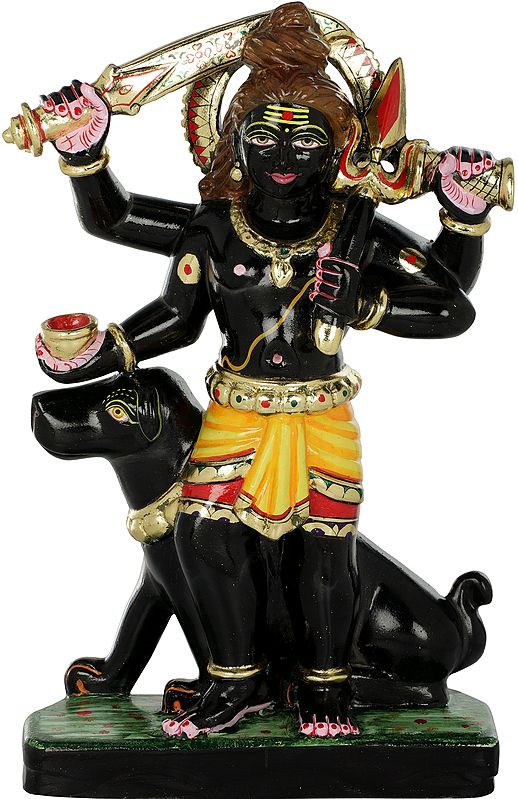 Bhairava With His Mount Shwan: Dog

$795
Quantity
Notify me when this item is available
This statue, carved with a divine figure with a Shwan : dog, as black as the figure of the deity, represents Bhairava, the fierce manifestation of Lord Shiva. Corresponding to Bhairava’s form : a body smeared with ashes from a live pyre hence skin almost burnt and dark, this four-armed form of Bhairava has been carved out of a block of black stone. Except his loincloth, palms, lips, eyes or toes like body parts, ornaments and attributes carried in hands painted mainly in red, pink, golden and silver colours, the divine figure, as well as the mount, has been conceived as completely black. Though he represented Shiva’s annihilation aspect, and there are his forms like Krodha-Bhairava or Rudra-Bhairava, both suggesting his angry manifestations, and his figure often abounds in awful attributes like the garland of decapitated human heads, Bhairava’s face does not reflect even a trace of fearsomeness, or even hardness, and is represented as a rule as the most simple unpretentious, straight forward divinity.

In visual manifestations, besides that his figures are simple, pure, uncomplicated and informal, his sculptures are conceived with rare benignity and sublimity on the face, and an anatomy, with hardly an element of dramatization. Except for its black body-colour, mount dog that the tradition assigns strictly to Bhairava, and his Shaivite attributes, there enshrines on the face of the figure, or rather in its entire form, a great divinity, a childlike naïve simplicity and innocence and rare aesthetic quality. A healthy child-like conceived this form of Bhairava has a round face with fascinating features : large thoughtful eyes, well defined nose, cute small lips, moderate cheeks, proportionate ears, a broad forehead with a red flame-like mark suggestive of both, a ‘tilaka’ and a third eye, a well-aligned neck and a highly balanced anatomy. As simple are his ornaments for neck and waist, both consisting of large beads, and rings around wrists. He is carrying in his four hands a sword, trident, ‘damaru’ – double drum, and bowl.

In Shiva’s worship cult Bhairava is one of his most worshipped manifestations, perhaps second only to the worship of Shiva-ling, Shiva’s aniconic manifestation. His worship is more prevalent in Rajasthan, Tamilnadu, Sri Lanka and Nepal and is a highly sacred divinity among Buddhists and Jains besides Hindus. Bhairava is the principal deity of Aghora sect and for a number of Tantric systems. Being the mentor and spiritual guide of the notorious planet Shani Bhairava, in his form as Kala Bhairava, one of his eight manifestations, usually has a shrine, independent or subsidiary, along a temple dedicated to Shani. The tradition of worshipping Bhairava for mitigating the adverse affect of Shani is quite popular. Bhairava is revered as one who guards the Shiva’s Jyotir-ling shrines; hence every Jyotir-ling Pitha essentially has a Bhairava shrine in the vicinity. At such places rituals begin with Bhairava worship at early hours in the morning. In Nepal, one of its major tribes, Newari, is the staunch devotee of Bhairava. There is no Newari settlement in Nepal that does not have a Bhairava temple.

In Rajasthan almost every hamlet has a temple, large or small, dedicated to Bheruji : the Rajasthani version of Bhairava. Tamilnadu also has a very wide spread cult of Bhairava-worship. Known by the name of Vairavar Bhairava is worshipped in almost every village in entire Tamilnadu as the Gram Devata – village deity. Bhairava transcends Tamil barriers and reaches the Sinhalese land. Sinhalese people call him Bahirawa. He is worshipped among Sinhalese as the protector of treasuries. Though himself a manifestation of Shiva, Bhairava has his own manifestations, their number being eight : Kala Bhairava; Asitanga Bhairava; Samhara Bhairava; Ruru Bhairava; Krodha Bhairava; Kapala Bhairava; Rudra Bhairava; and, Unmatta Bhairava. These manifestations represent Bhairava’s one aspect or other. The form of Bhairava has usually associated with it some attributes, a number of snakes to comprise his ornaments, tiger-skin to make his ensemble, human bones to make his apron, a dog, for his mount; however in this manifestation the sculptor has used only dog icon that Bhairava rides. 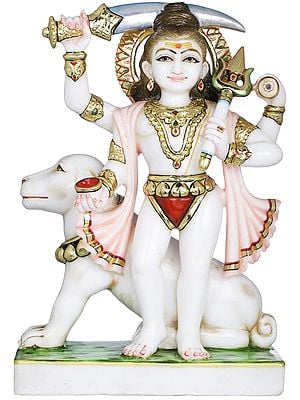