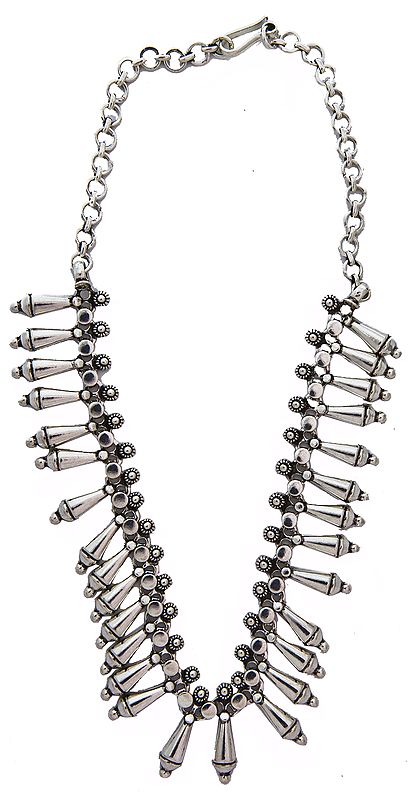 $185
Quantity
Notify me when this item is available
An ornament of the class that seeks its merit in its rare craftsmanship, art and strange visual effect that astonishes the mind by its stark simplicity and novelty of form, not in the volume or value of metal or material used in fabricating it, which is obviously meagre, the necklace has the ethnicity of a Naga girl’s neck ornament experimenting with any form, a turret, trumpet, drum, cucumber, any fruit or root … but attributing to it some essential meaning – often universal, finish and precision of the finest ornament, and exclusiveness and fascinating look, its own. The main designing pattern – a stylized form of banana-bud, seems to have been inherited from the nineteenth century Tamilnadu – a tradition still live, where not only a necklace but other ornaments were designed with banana-bud pendants, the most auspicious and popular fruit in entire South. A large part of south Indian population being Shaivite, it seems to have seen in banana-bud also the form of phallus – ‘ling’, the male fertility principle and widely worshipped Shiva’s aniconic deity-form. A highly conventionalised form, almost beyond recognition, the silversmith might have combined with the bud form also the form of sacred phallus.

Provided with a hook and tail at the ends for adjusting its length and proximity to the neck the necklace has been designed as adjustable choker type to be worn close-fitted to the neck or a little loose. A delightful paradox, too tiny forms that the necklace comprises reveal an as much bold look and mesmerizing effect. These are obviously not the smith’s tools that created it but rather a massive imagination and rare artistic skill that worked in producing it. So compact and unified, the necklace, consisting of a number of independent units, is strangely flexible. All units are so similar that they appear to have been die-stamped. Chained one-to-one using a set of another unit they seem to have been conceived for circumambulating the neck with rhythmic delicacy and beauty of dance. The only flaw of this flawless piece could be that it would desist sharing the wearer’s neck with any other ornament taking the risk or responsibility of glowing it solely by its own glow. In its case ‘exclusivity’ does not suggest only that the piece of ornament is different from all others but also that the neck wearing it has to be its ‘exclusive zone’ for it is the class of ornament that shall have its best when worn alone and single.

The choker has been designed with twenty-nine main-design units and twenty-eight those threading them, the two conjointly transforming assemblage into a tremendously charming piece of jewellery. The units used for joining the main units are far tinier than the main but working as both, the conjoining loops and spacers beautifully manipulating the intermediary spaces they as much contribute to the total beauty of the piece. Each of the main design-units consists of three miniaturised forms evolved during the long past, not suggestive of an apparent meaning except what each part acquires by association. The reverse of the main unit, consisting of two tiny rings soldered together, comprises the base-structure of the unit as well as of the entire piece. On the top this two-ring unit has a third ring, as tiny as them. On reverse this third ring has the same circular form as the other two but its obverse consists of a tiny Maulashri flower – a large size annually flowering green tree with exceptionally fragrant white tiny multi-petalled flowers, a motif highly used in traditionally Indian jewellery. A pendant-like looking component – the most dominating part of the unit, comprises its bottom. A highly conventionalized form, this component represents variously a banana-bud as also a phallus form – the aniconic ‘ling’. The threading unit comprises a ring-loop used for joining main units on its interior, and a square, divided into four parts, often identified as ‘diamond-cut’ design, on the obverse. 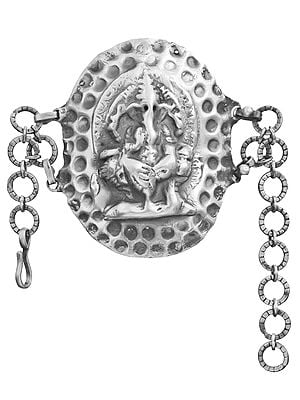 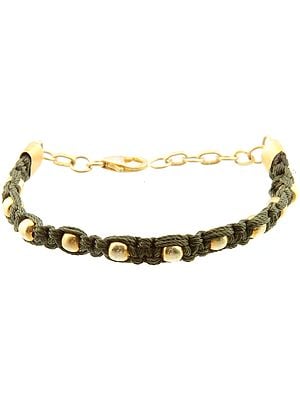 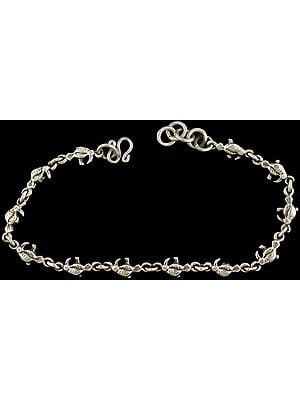 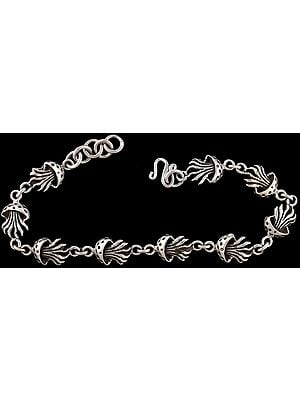 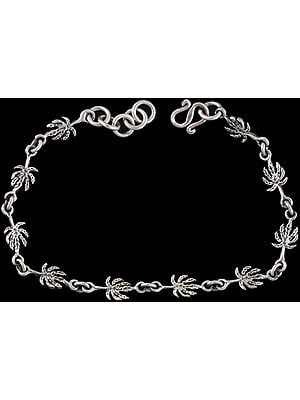 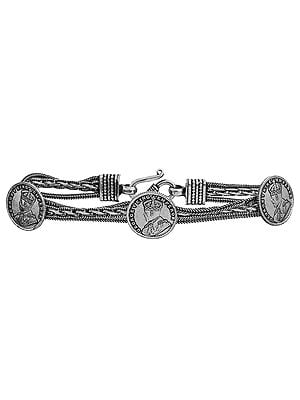 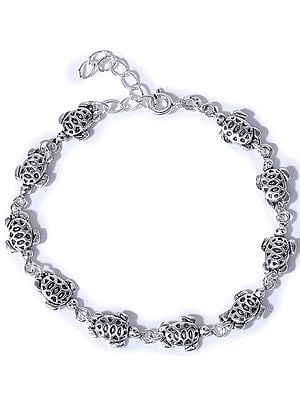 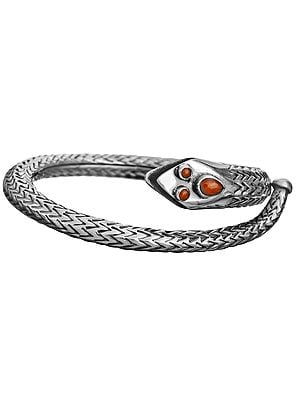 Sterling Serpent Bracelet
Adjustable in Size
$125
Out of Stock 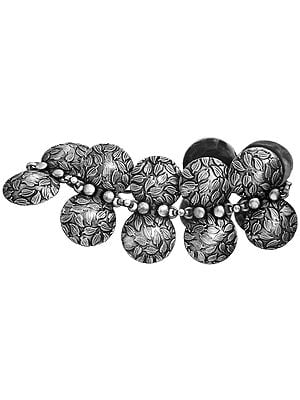 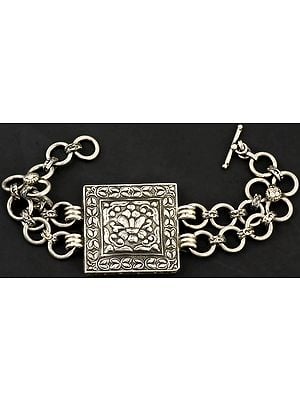 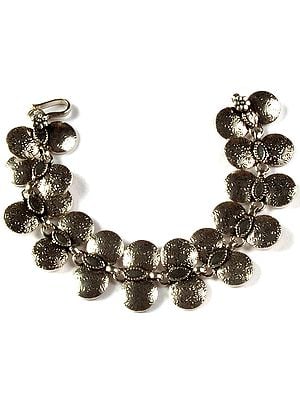 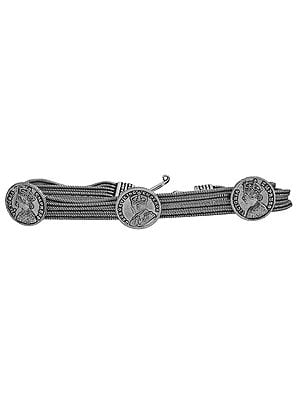 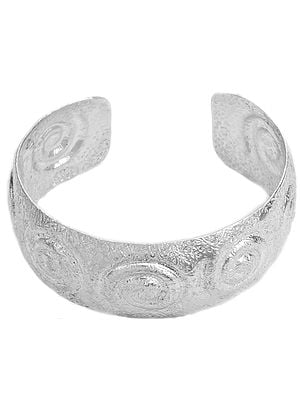 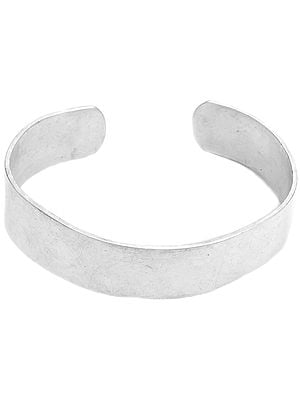 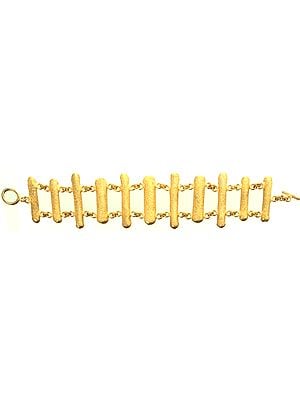 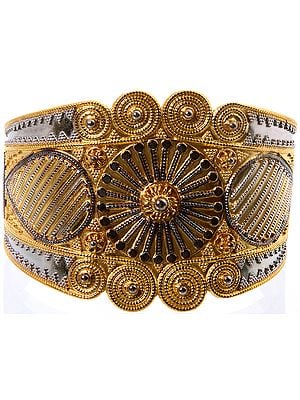