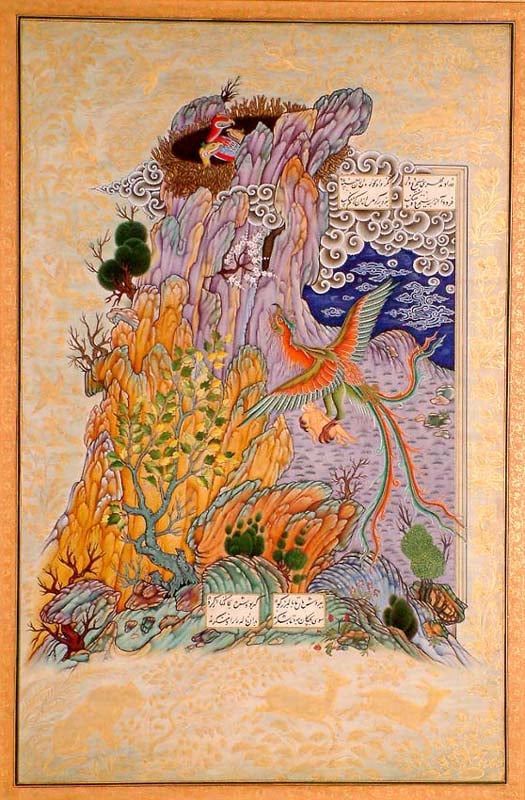 $1395
Quantity
Notify me when this item is available

The principal hero of the Shahnama is Rustam. This painting narrates an important episode in the life of Zal, the father of Rustam. Zal in turn was the son of king Sam.

According to the Shahnama:

In the women's quarters of his house, Sam possessed a lovely maiden, her cheeks as ruddy as rose-petals, her hair black as musk. From her he had hopes of a son, for she was sunny-cheeked and seemly; but in her pregnancy she suffered great distress from the weight of the burden she bore. When the child was severed from his mother his face was beautiful as the sun, but his hair was entirely white, and for a whole week because of his strange appearance news of his birth was not brought to his father Sam. Those who lived in the inner quarters of that noble warrior's mansion stood weeping before the child, none having the spirit to tell Sam the Hero that the son borne to him by his beautiful wife was hoary-headed.

Yet Sam had a nurse whose courage was that of a lion, and it was she who boldly approached the warrior with the happy news of the birth of a son to him. She said, calling down benedictions:

'Fortune prosper Sam the Hero! May the hearts of his ill-wishers be torn out! God has granted what you have desired. Embellish your soul with the fulfillment of your wishes. Behind the veil in your palace, illustrious prince, a handsome son has been born to your wife; a young paladin with the heart of a lion. Even now, in his baby state, he shows himself to be of sturdy nature; his body is of pure silver, his face like Paradise. You will see no ugly feature in him, his one blemish being that his hair is white. That is something which destiny has decreed for you, illustrious prince, and you needs must be reconciled to it, not permitting your spirit to be ungrateful or your heart downcast.'

Sam the Hero at once descended from his throne and entered behind the veil to where his son lay like fresh spring. His eyes fell on a handsome boy whose head was hoary in a fashion that he had never beheld or been told about. Every hair on the child's body was like snow, but his cheeks were ruddy and beautiful. On seeing his son thus, with his white hair, Sam felt his worldly ambitions frustrated and, in great fear that he might become the butt of ridicule, he strayed from the path of wisdom and chose a strange course. With his face turned towards Heaven he prayed for the dulgence for any act he might be about to commit.

'O Thou who are above all crookedness and imperfection, he prayed, 'blessings are multiplied when Thou desirest. If I have committed a grave sin or if I have allowed myself something that belongs to the religion of Ahriman, then let the Lord of the World in consideration for my repentance grant me forgiveness even if it be hidden from me.

'My blackened soul writhes with shame, the blood surges hotly within my body because of this child, which, with his dark eyes and hair white as the syringa, resembles a child of Ahriman. When proud noblemen come to make enquiries of me they will see this ill-omened boy, and then what shall I say of this demon-child: that he is a parti-coloured leopard, or an entire peri? The great ones of the world will mock me because of this infant, both openly and in secret. Because of this disgrace I must depart from the land of Iran and refuse my homage to this country and clime.'

All this he spoke in his anger, with a contorted face, and so disputed with his fate. The child, he commanded, was to be removed from the land and abandoned in some remote place. Now there was a mountain called Alburz, nearing the sun in height and far from association with men, where the simurgh (a fabulous mythical bird) had its nest, an abode inaccessible to all. Upon that mountain the child was placed and there left.

A long time passed by. The hero's innocent babe could distinguish neither black not white. His father had severed all affection for him and cast him away with loathing. (A story is told of a lioness who, as she sated her cub with her milk, said to it, 'When I gave you my heart's blood, I demanded no gratitude, for you are as living a part of me as my own heart, which would be rent from me if you departed.' How much kinder to their offspring are the wild and tame beasts of his earth than men!) In that spot where the little child had fallen he lay without shelter day and night, and for a time he sucked his own finger-tips and cried. Now when the Simurgh's brood grew hungry she flew aloft from her nest and so caught sight of a babe weeping. The earth around him appeared as an ocean in storm. His cradle was of thorns and his nurse was the ground. His body was bare of covering and his lips clean of any milk. Round about him were gloomy deep chasms, while above him blazed the sun, high in the heavens. Had even leopards been his parents they would have sheltered him from that sun.

The Simurgh swooped down from the clouds, thrust out her claws and lifted the babe from the torrid rock, then carried him to that point of the Alborz mountains where lay her eyrie and her brood. She offered him to them for a victim, urging them to pay no heed to his bitter weeping. But God the beneficent delivered him and granted him hope of the prolongation of his life, while the Simorgh stood gazing in astonishment at the little babe with the tears of blood trickling from his eyes. Picking out the tenderest portions of her own prey she fed her milk-starved guest on their blood.

Many literary descriptions of mythical animals were given visual form in Persian art, where their identity and attributes were elaborated. Pre-eminent among them was the simurgh, and Shihabuddin as-Suhrawardi, a Sufi master of the twelfth century, described its qualities, calling it a symbol of the divine origin of all earthly beauty:

"Know that all colors derive from Simurgh,
although she herself is without colors.
All knowledge derives from the incantation of this Simurgh.
The marvelous instruments of music, such as the organ and others,
have been produced from its echo and its resonances
Her nourishment is fire..
The morning breeze stems from her breath.
This is why the living tell her mystery of their hearts..

The poet 'Aufi (ca. 13th cent.) described the Simurgh as having "energy from the falcon, power of flight from the Huma (another mythical bird full of blessing power), a long neck from the ostrich, a feathery collar from the ringdove, and strength from the karkadann (unicorn)."

This "heavenly" bird intervened in the affairs of men by saving Zal (second of the four great heroes of the Shahnama), nourishing him with her own young after his father had abandoned him. When returning Zal to Sam, she gave him one of his feathers, which, if lit in a moment of danger would instantly recall her to his aid.

The attributes and the iconic elements of the simurgh's physiognomy were well established in literary sources: it was large enough to carry human beings, held either in its strong beak or by its powerful talons; and had glorious plumage and flowing tail feathers which reflected the color of the spectrum of the divine. The Simurgh has been portrayed in this Persian Masterpiece.

The painting transcends its ruled margin on all sides, and the simurgh's tail is a rich profusion of orange and iridescent green feathers trailing behind her as she holds the infant Zal in her claws and ascends to her enormous nest at the top of the mountain. The boulders are cragged, and their surfaces marked with contrasting shades. Curling Chinese clouds, both white and gray (bordering on stormy blackness), float in the rich, dark sky.

The margins are extravagantly painted with golden animals and birds in lush landscapes, indicating the skilled hands of a master at work.

A long time went by, during which the child remained there undiscovered, while he was ever growing in strength. Then, one day, a caravan crossed the mountain. The child had grown to manhood; his stature was that of a free-growing cypress, his chest a silver mountain and his waist slender as a reed. Reports of him spread abroad throughout the world - for neither good nor evil endures in concealment - the news about this happy youth and his splendor at last reaching Sam., the father of Zal and the grandfather of Rustam.

Sam hastened to the scene and looking up saw his son. When he tried to climb towards him, he could not ascend to the lofty perch. He then prayed to the almighty, asking for forgiveness. No sooner has he addressed his prayers to the lord than they were answered and the Simurgh, seeing that Sam had come for his son, lifted Zal out of her nest and in one short swoop brought him down to his father. The accompanying illustration shows Sam approaching the Mount Alburz in search of his son. 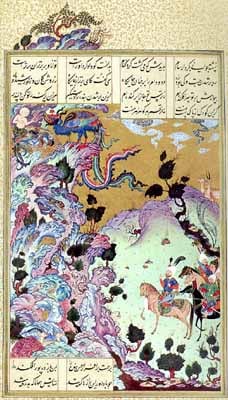