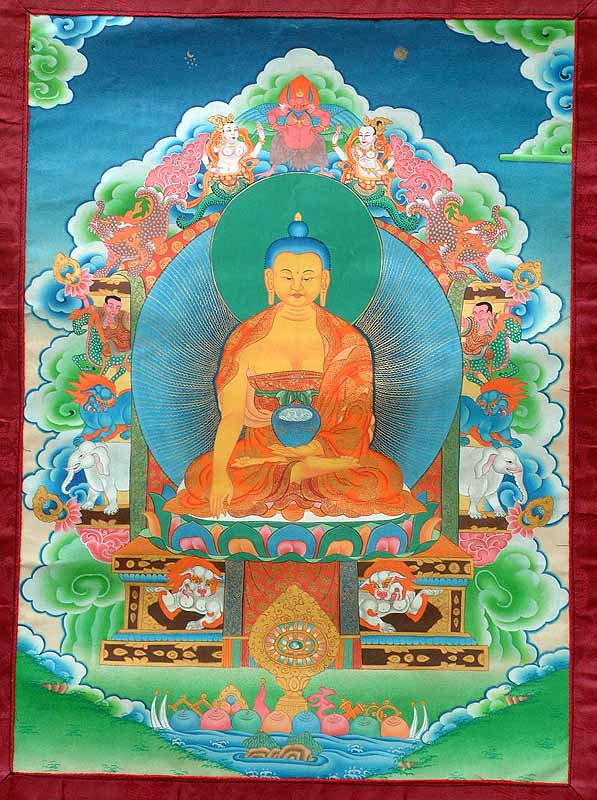 Buddha Seated on The Six-Ornament Throne of Enlightenment

$255
Quantity
Notify me when this item is available

Fair trade
Shakyamuni Buddha is shown in his customary vajra posture with his right hand making the 'earth-touching' mudra. He is seated on a moon disc placed above a multicolored lotus which rests on a lion throne. An ornate square pedestal base forms the lion throne, which is supported on each of its four sides by lions.

On either side of the base of the lotus throne are two elephants. On the elephants' backs stand two blue lions. Above the lions stand two composite animals which resembles a horse in appearance. On the back of the composite animals sit two young dwarfs, whose hands support an entwined jewel crossbeam draped with silk brocade. The dwarf is a symbol of colossal strength in a diminutive stature, and since all of the above animals symbolize strength, speed, and power, the dwarf is their human equivalent.

The crossbeam is capped with an entwined jewel at either end. Two makaras with upturned heads face outwards above the crossbeam, their fabulous 'feathered' tails forming a design of intricate scrolling spiral roundels.

On the makara-tails rest two young naga serpents, with human upper bodies and serpent tails from their waist downwards. At the very top stands Garuda, devouring a long snake which the nagas hold up for him.

These six creatures represent the 'six perfections' of the enlightened mind:

1). The two lions at the base represent the perfection of wisdom (prajna).

2). The two elephants represent the perfection of concentration (dhyana).

3). The two dwarfs represent the perfection of effort (virya).

4). The two makaras represent the perfection of patience (kshanti).

5). The two nagas represent the perfection of morality (shila).

An interesting point to observe is that the crossbeam divides the throne into two distinct sections, with the three upper creatures; makara, naga, and Garuda symbolizing the watery, underground and heavenly realms. The lower portion symbolizes the Buddha's conception (elephant), enlightenment (lion), ascent to Tushita heaven (deva), and reconciliation of the faction in the sangha (crossbeam).