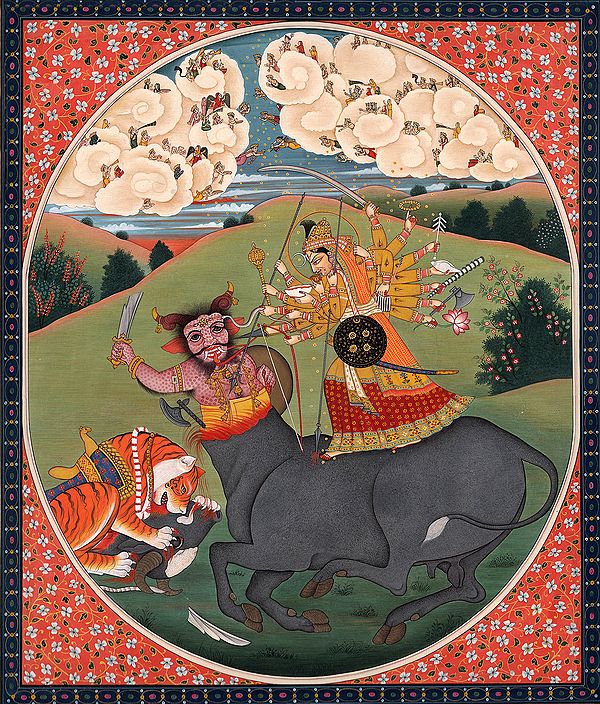 Fair trade
This brilliant painting, contained within a double frame, an oval inner in a rectangular exterior and the triangular space in between manipulated with beautiful floral design, represents the eighteen-armed Durga killing the buffalo-demon Mahisha. In colour-scheme, pastoral background consisting of hills, flowering plants and foggy clouds, and in the Devi’s iconography and the style of her helmet-like headgear with a hair-brush like crest, the painting pursues Pahari art idiom as it prevailed in hill region around the early nineteenth century, though for her costume-fashion, the deep red lehanga with beautifully painted broad border and gold-painted field and saffron ‘odhani’ with gold and silk brocaded brilliant motifs the artist has used Rajasthani art idiom. A number of medieval miniatures have used, as here in this painting, saffron with black irregular stripes for the body-colour of the goddess’s mount.

Lest the hugeness of the buffalo’s body overshadowed the figure of the goddess and the primary drama involved in killing the demon and his emergence from the animal’s severed neck the artist has merged the animal’s figure, the body colour and all details – almost completely subdued, into the background. Leaving her mount lion to let it have its own role in the action and its own exploit the Great Goddess, baffling the buffalo demon, has leaped over the animal’s back and charging at it with her trident has severed its head forcing the demon to emerge out of the animal’s body into which he had transformed himself. In a quick succession of action she has pierced the demon’s breast with her trident, his neck, with her dagger, and throttled his throat with her noose, all actions effected almost in simultaneity before the demon readied him. A sublime force and divine energy defines the act of the goddess, and before her Mahishasura seems to be completely baffled and dismayed, and helpless he seems to submit to her as if his destiny.

The goddess is carrying in her nine right hands trident, mace, serpent, noose, dagger, bow, a cup of vine, a bowl filled with blood and a spear. In her nine left hands she is carrying a necked sword, disc, fork, conch, rod, arrow, bell, battle-axe and lotus besides a shield and scabbard carried along her waistband. Though she is carrying four major Vaishnava attributes : disc, conch, mace and lotus, and the sword of Indra, another divinity in Vaishnava line, but with a third eye and crescent on her forehead, and the trident, snake and noose being her operative weapons, the Shaivite links of the goddess are more decisive. As usual in representing the theme the artist has delineated the demon as half buffalo and half man, the man-part emerging out of the decapitated figure of the animal revealing the demon’s Mahisha – buffalo, identity. Completely motionless and inert the animal lay under the firm feet of the goddess.

The goddess has been portrayed as using just three of her multiple hands in eliminating Mahisha suggesting that in the cosmic existence the proportion of divine energies, as compared to the demonic, is simply massive. Mahisha, meaning buffalo, born of a she-buffalo by the demon Rambha and hence having a buffalo’s appearance and also name, is the Puranic symbol of all demonic powers whether in the nature of man or animal. As various myths have it, Mahisha, an ambitious demon, won from Brahmadeva after rigorous penance the boon of invincibility against all males. This made him highly ambitious and arrogant. After he had uprooted all earthly kings he invaded heaven and defeated Indra and all gods and evicted them of Indraloka – their abode. When approached, Brahmadeva disclosed that under a grant no male – a god, man or beast, could ever kill him, and also that it was only a female who could eliminate the demon. The gods’ was a world of males, hence, they decided to create a female divinity out of their own powers and attributes. This creation of gods was Devi who in due course killed Mahishasura. In popular worship tradition this warrior form of the goddess is venerated as Durga, and for killing Mahisha, as Mahishasura-Mardini. 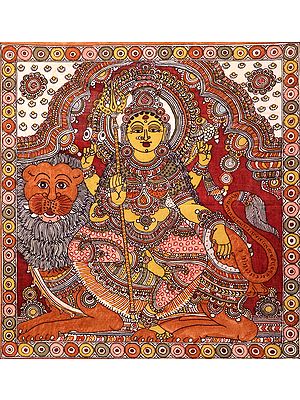 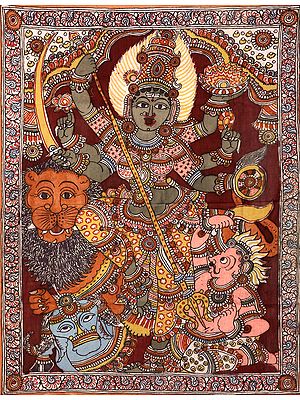 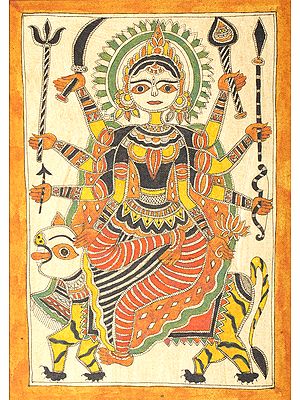 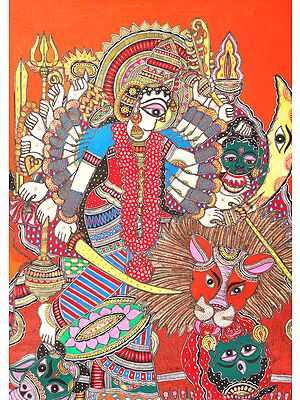 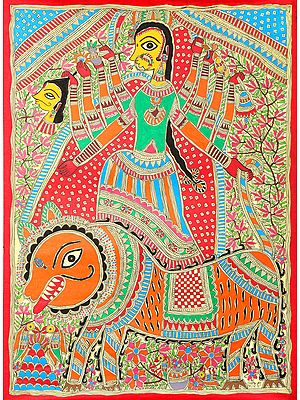 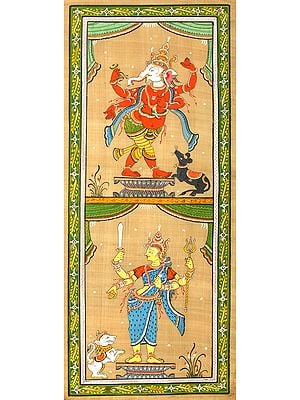 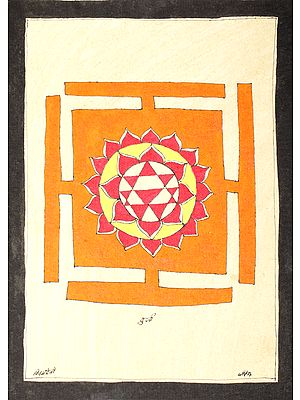 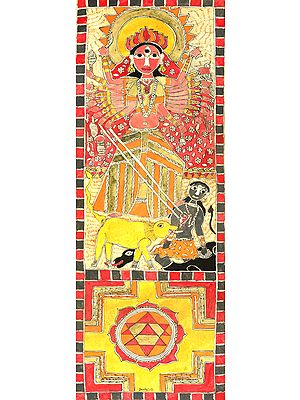 Devi Durga as Mahishasuramardini with Her Yantra
7.2 inches x 21.5 inches
$60
Out of Stock 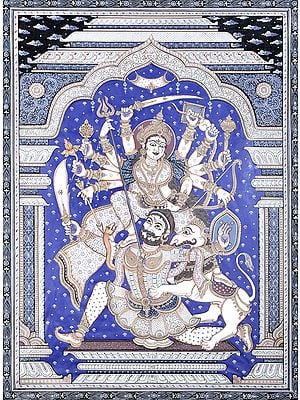 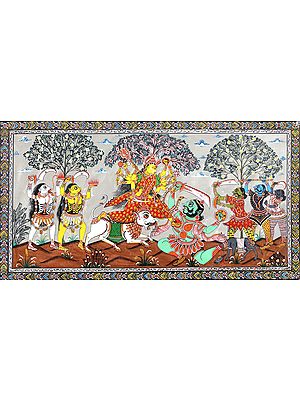 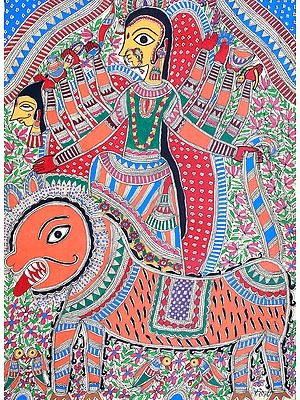 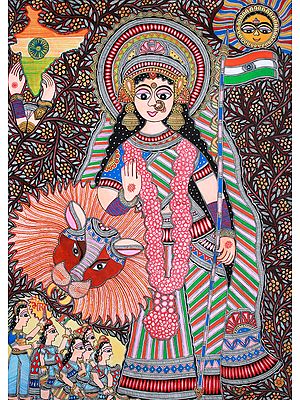 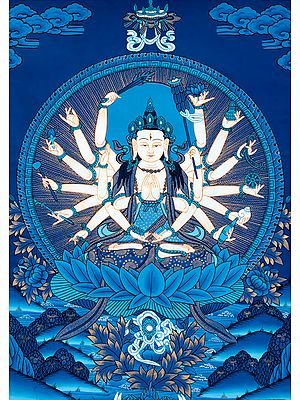