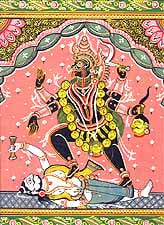 $95.00
FREE Delivery
This item can be backordered
Time required to recreate this artwork
6 to 8 weeks
Advance to be paid now
$19.00 (20%)
Balance to be paid once product is ready
$76.00
Notify me when this item is available
Kali makes her 'official' debut in the Devi-Mahatmya, where she is said to have emanated from the brow of Goddess Durga (slayer of demons) during one of the battles between the divine and anti-divine forces.

Kali is represented as a Black woman with four arms; in one hand she has a sword, in another the head of the demon she has slain, with the other two she is encouraging her worshippers. Her only clothing is a girdle made of dead men's hands, and her tongue protrudes from her mouth.

Kali's fierce appearances have been the subject of extensive descriptions in several earlier and modern works. Though her fierce form is filled with awe- inspiring symbols, their real meaning is not what it first appears- they have equivocal significance:

Kali's blackness symbolizes her all-embracing, comprehensive nature, because black is the color in which all other colors merge; black absorbs and dissolves them. 'Just as all colors disappear in black, so all names and forms disappear in her' (Mahanirvana Tantra). Or black is said to represent the total absence of color, again signifying the nature of Kali as ultimate reality. This in Sanskrit is named as nirguna (beyond all quality and form). Either way, Kali's black color symbolizes her transcendence of all form.

Kali's nudity has a similar meaning. In many instances she is described as garbed in space or sky clad. In her absolute, primordial nakedness she is free from all covering of illusion. She is Nature (Prakriti in Sanskrit), stripped of 'clothes'. It symbolizes that she is completely beyond name and form, completely beyond the illusory effects of maya (false consciousness). Her nudity is said to represent totally illumined consciousness, unaffected by maya. Kali is the bright fire of truth, which cannot be hidden by the clothes of ignorance. Such truth simply burns them away.

She is full-breasted; her motherhood is a ceaseless creation. Each skull of her garland of fifty human skulls, represents one of the fifty letters of the Sanskrit alphabet. She wears a girdle of severed human hands- hands that are the principal instruments of work and so signify the action of karma. Thus the binding effects of this karma have been overcome, severed, as it were, by devotion to Kali. She has blessed the devotee by cutting him free from the cycle of karma. Her white teeth are symbolic of purity (Sans. Sattva), and her lolling tongue which is red dramatically depicts the fact that she consumes all things and denotes the act of tasting or enjoying what society regards as forbidden, i.e. her indiscriminate enjoyment of all the world's "flavors".

Kali's four arms represent the complete circle of creation and destruction, which is contained within her. She represents the inherent creative and destructive rhythms of the cosmos. Two of her hands, making the mudras of "fear not" and conferring boons, represent the creative aspect of Kali, while the other two hands, holding a bloodied sword and a severed head represent her destructive aspect. The bloodied sword and severed head symbolize the destruction of ignorance and the dawning of knowledge. The sword is the sword of knowledge, that cuts the knots of ignorance and destroys false consciousness (the severed head). Kali opens the gates of freedom with this sword, having cut the eight bonds that bind human beings. Finally her three eyes represent the sun, moon, and fire, with which she is able to observe the three modes of time: past, present and future. This attribute is also the origin of the name Kali, which is the feminine form of 'Kala', the Sanskrit term for Time.

Kali's boon is won when man confronts or accepts her and the realities she dramatically conveys to him. The image of Kali, in a variety of ways, teaches man that pain, sorrow, decay, death, and destruction are not to be overcome or conquered by denying them or explaining them away. Pain and sorrow are woven into the texture of man's life so thoroughly that to deny them is ultimately futile. For man to realize the fullness of his being, for man to exploit his potential as a human being, he must finally accept this dimension of existence. Kali's boon is freedom, the freedom of the child to revel in the moment, and it is won only after confrontation or acceptance of death. To ignore death, to pretend that one is physically immortal, to pretend that one's ego is the center of things, is to provoke Kali's mocking laughter. To confront or accept death, on the contrary, is to realize a mode of being that can delight and revel in the play of the gods. To accept one's mortality is to be able to let go, to be able to sing, dance, and shout. Kali is Mother to her devotees not because she protects them from the way things really are but because she reveals to them their mortality and thus releases them to act fully and freely, releases them from the incredible, binding web of "adult" pretense, practicality, and rationality.

This is a pata painting. Pata is a Sanskrit derivation which literally means canvas so pata-painting means a scroll painting on canvas. The art of Pata Painting (or pata chitra) is practiced by the artists of Orissa, a state on the Eastern Coast of India.