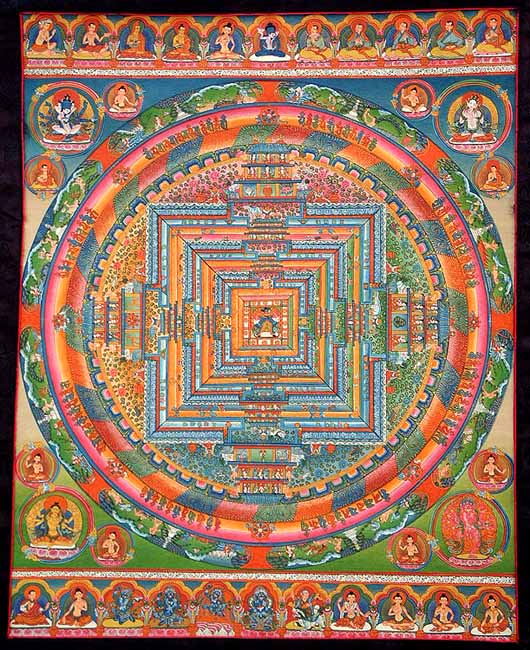 $325
Quantity
Notify me when this item is available

Fair trade
The outermost circle of the Kalachakra mandala depicts the eight charnel grounds, which symbolize the eight feelings and mental activities that bind people to samsara and therefore need to be destroyed.

The next circle contains the eight dharmachakras that refer to the historical Buddha setting the wheel of the teachings into motion. Letters between the wheels indicate various deities.

Next is the ring of fire, rendered florally in rainbow colors. Fire in Tantrism means knowledge. Without knowledge (prajna) there is no possibility of arriving at supreme understanding. Here, fire also means that believers who enter the mandala are purified, as it were, and at their passage through the purging fire, their ego and all their illusions will burn away.

Then there is a circle of lotus petals. Here the spiritual realm begins and one enters the mandala.

Esoteric Buddhist thought believes that the cosmic mountain, Mount Meru, where the gods live, is in the center of the cosmic ocean.

The Kalachakra mandala has as its center Mount Meru with the four corners of the world around it. On a flat plane, only the projection of this can be seen. The four corners are rendered as four gates that are each colored differently. Each cardinal direction is indicated by a color. The elements of earth, water, fire, air, and ether that are symbolized by the structural portions of a stupa and thus are also present in Mount Meru, are indicated in the mandala by the various squares. Through the entrance gates, the believer gets inside the mandala.

According to tradition, Shakyamuni Buddha is supposed to have communicated the Kalachakra tantra in the mystical land of Shambhala. It is in the heart of Shambhala, in the center of a palace with nine stories, that there is believed to be a large Kalachakra mandala.

Shambhala is a mythic kingdom, believed to lie somewhere to the north of Tibet, surrounded by high, snowy mountains. Shambhala is a paradise on earth. Its people are not acquainted with illness or hunger and nothing but happiness prevails. This practically unattainable utopia can only be found by people who are sufficiently pure of spirit and free of ignorance. The Panchen Lamas are said to reincarnate as kings of Shambhala. At the topmost layer of the painting can be seen the various kings of Shambhala.

This enviable paradise led to numerous literary and artistic speculations in the West. The one that became most famous was the creation of the ideal world of Shangri-La in the James Hilton novel Lost Horizons, first published in 1933.

The Dalai Lamas of Tibet (Book)