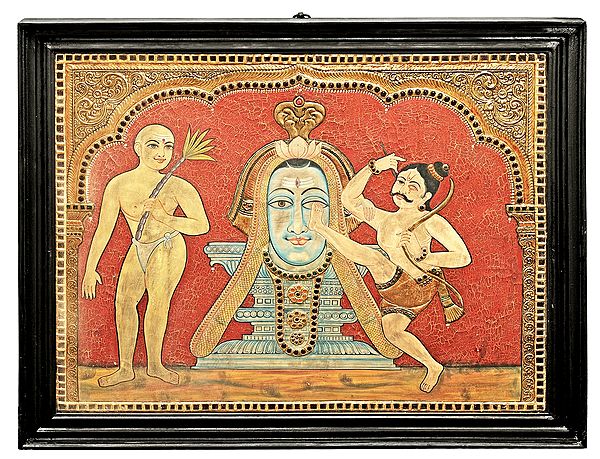 A scene of true devotion is depicted in this Tanjore painting, where an idol of Lord Shiva in cerulean stands in contrast to the dramatic, red backdrop. Kannappa, as he was called, was a forest hunter by profession. On one of his excursions, he saw Lord Shiva’s idol among the trees and began to offer his prayers daily. He would make a garland of forest flowers and hunt forest animals to bring to his lord. However, a priest who was taking care of the temple started feeling uneasy about the way the temple was handled by the hunter and he complained to the lord about it. The Lord replied that Kannapa was a true devotee and told the priest to come again another day to witness his prayers. Kannapa came to make his prayers while the priest hid behind a tree and watched him. Ruby red droplets of blood formed on the idol and began to fall from the lord’s eye. Kannapa blinded himself so Lord Shiva could see better. His love was so overwhelming that the lord appeared before him and embraced him with love. This Tanjore painting is studded with stones and etched in gold, the gleam of them adding to the sanctity of this scene.