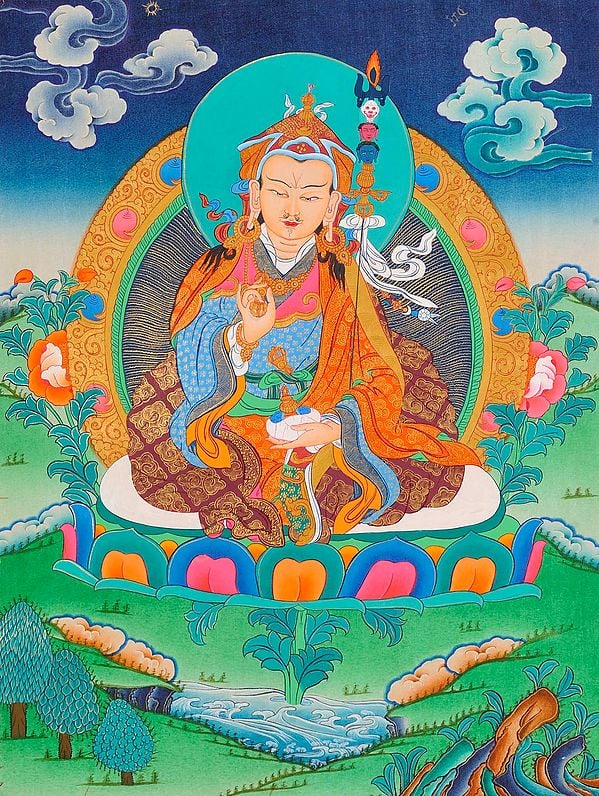 $325
Quantity
Notify me when this item is available

Fair trade
The great Siddha and Guru, Padmasambhava was a yogi per excellence. He was originally from Oddiyana, an ancient country of the North-western region of Indian-subcontinent. According to tradition once Amitabha emits  a red ray of light that pierce the Dhanakosha Lake in Oddiyana and an immaculate lotus arises from the centre of the of the Lake. King Indrabhuti dispatches his minister to find out the miraculous emanation. The minister finds a child of eight, seated in the lotus, encircled by rainbow auras and dakinis. When the child is brought to the court and the king asks him he replied  "my father is wisdom, my mother is voidness. Mine is the country of Dharma." The boy was called Padmasambhava, lotus-born and he was adopted by the king. But later on he left the palace and society and went off to become a Buddha, which he soon accomplished. He then left the monk-hood and became an adept, going around India to meditate in cemeteries and wildernesses.

Padmasambhava was renowned for his knowledge of Buddhist tantric dharanis and of their efficacious application. He was invited to Tibet by the Tibetan king Trisong Detsen (8th century A.D.) on advice of the famous Buddhist acharyaShantarakshita to tame local deities and initiate tantric Buddhist teachings in Tibet. Padmasambhava in collaboration with them founded Samye monastery in the Land of Snow. It is said that he remained fifty years in the country, created monasteries and teaching the Tantra-Yogacharya doctrine. He is said to have subdue all the malignant gods, sparing only those that became converted to Buddhism and that promised to be defenders (Dharmapala) of the doctrine. Padmasambhava, in his turn, promised to enroll them in the Mahayana Pantheon and to see that they were properly worshipped. He thus succeeded assimilating parts of local Bon religion into Vajrayana Buddhism. Padmasambhava claimed to have received from the Dakini the books from which he acquired his miraculous powers. He is considered as a major cultural hero of all Tibetans, however his teaching are central in the practice of the Nyingmapa. He founded Lamaism in Tibet. Tibetans call him Guru Rinpoche or Precious Teacher with reverence and consider him as a second Buddha.

Padmasambhava was deified and incarnated into eight forms, one for each of eight important actions he performed during his lifetime. The eight manifestations of Padmasambhava are as follows:

1. Vajradhara or Mahavajradhara  In this Padmasambhava incarnates himself in the five mystical families of Mahavajradhara for spreading the lofty and secret teachings of esoteric mantras. Vajrapani appeared to the Guru after he attained mystical realization in the cave of Kosha-Chandra in Nepal. From the heart of the Guru a sheaf of light descends to bless, to enlightenment. Thereafter he was also called Vajradhara.

2. King Padmaraja  In this he manifests himself as the royal king Padmaraja, this royal persona he adopted when living in his original homeland Oddiyan.

3. King Loden Chogsay  Padmasambhava took this form as the conveyer of knowledge to all worlds.

4. Suryaprabha (Nyima Odzer)  Guru earned this name after teaching the dakinis in the charnel ground of radiant beatitude in Kashmir for five years. He sojourned in Akanishta Heaven and received the teachings directly from the Adi-Buddha Samantabhadra.

5. Dorje Drolod (Vajra Comforter of Beings)  Rinpoche took this form to subdue demons that were troubling the people of Bhutan. He flew there mounted on the back of his consort, Mon princess Tashi Kyidren, who transformed herself into a flying tigress. This wrathful manifestation specialized in subduing demons and negative forces.

6. Guru Dradog  he took this form as a propagator of religion in the six worlds with the roaring lion's voice. The name was given to him when he won a debate at Bodhgaya converting many to Buddhism.

7. Padmasambhava as a Nyingma monk  In this Guru dresses as Nyingma monk and holds a skull-cup in his right hand and makes a teaching gesture with his left. This manifestation indicates Guru's initiation into the Mahayana teachings and his entry into Bodhisattva path. 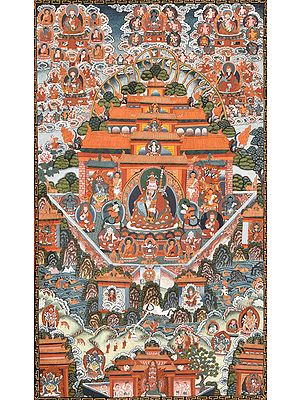 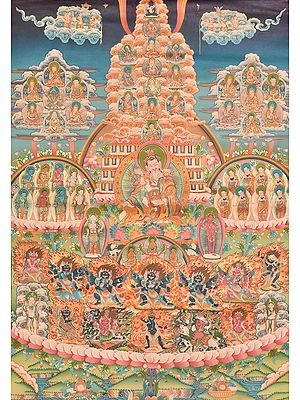 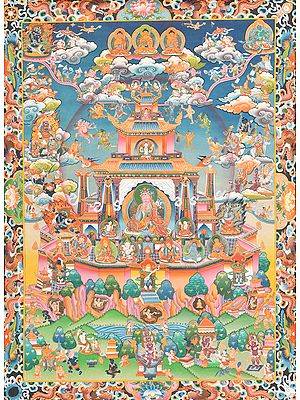