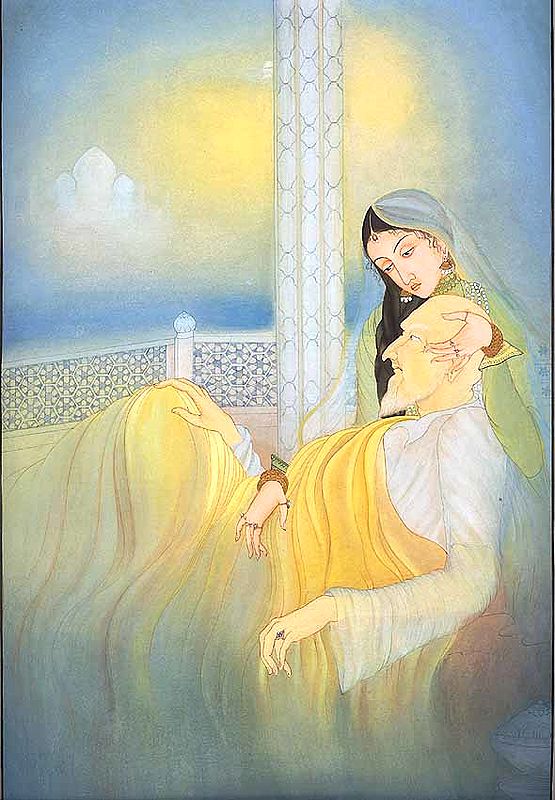 Fair trade
In 1557 Shah Jahan fell so seriously ill that he was expected to die. After a violent fight between the emperor's sons, Aurangzeb emerged the winner. The character of the Mughal court changed from one of extreme opulence to asceticism, reflecting the increasingly pious leanings of the new emperor.

This heartening picture of the ill Shah Jahan with his daughter Jahanara is worked on in watercolors. Here he looks longingly at the Taj Mahal, the resting place of his beloved Mumtaz Mahal. Shah Jahan lived until 1666, held in captivity at Agra Fort. Few details are known of his activities during this long period, except that relation between Shah Jahan and Aurangzeb were extremely bitter and he was cared for by his daughter Jahanara. Surrounded by the designs of his artists and craftsmen preserved in marble on paint on the walls of the fort, he must have been acutely aware of the ebbing away of a great artistic era.

In this painting Shah Jahan is very old, features distorted with age, barley able to sit up without support. With failing eyesight, he can see the Taj - hazy and obscure. Jahanara, young and beautiful, fulfills the duty of a daughter in caring for her father. She a delicate oval face consisting of arched eyebrows, downcast eyes, a long sharp nose and a small pursed mouth. There is an unmistakable look of sadness on her face. Her thick, lush hair is braided and falls to one side. She is not wearing excessive jewellery, befitting a princess. She lovingly holds her father in her arms to provide him a better view of the wonder called 'Taj' Both father a daughter have thin hands with tapering fingers.

The artist's excellent draughtsmanship is evident in the confident lines of the faces. He has used more of lime green, yellow and blue for the central subject as well as in the background. The vertical white pillar tries to divide the painting but Shah Jahan and Taj Mahal cannot be separated, not even in pictures.