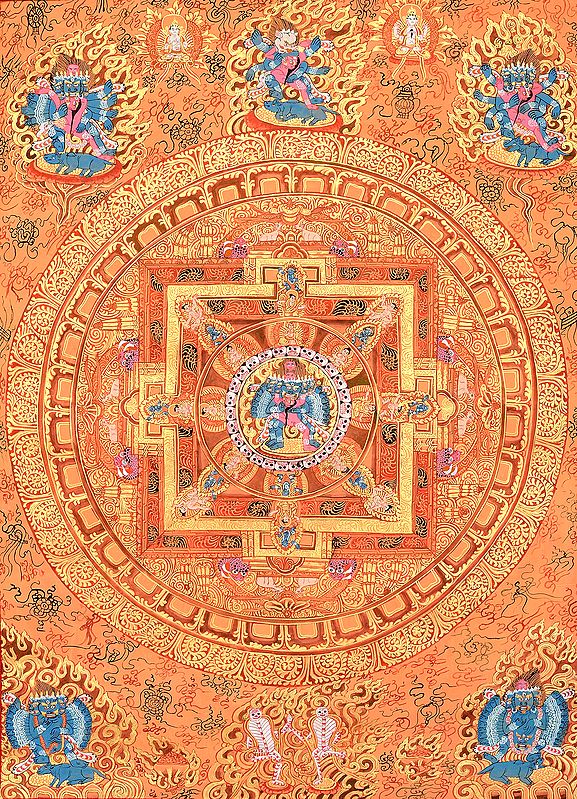 $243.75  $325   (25% off)
Heruka is one of the main deities of the Fifty-eight wrathful deities. Heruka is a name of wrathful deities known throughout Vajrayana Buddhism and is typically depicted with ferocious expressions. He is also the wrathful aspect of Buddha Samantabhadra, a primordial Buddha. Although they have forms that appear wrathful, they symbolize bliss and emptiness which are required for enlightenment. He is usually depicted with multiple heads and arms. In this thangka, the central image has nine heads and eighteen hands while the other forms of Heruka on the sides depict images with various quantities of limbs.

He is seen in yab yum position with his consort, Namshyalma. She traditionally holds a vajra weapon and a skull cap. This union represents the marrying of the male essence of compassion and skill with the female essence of enlightenment and insight. Heruka also sports a tiger skin on his clothing as a sign of power. The circle he is in is designed with elements of flames, which can signify the transformative power of fire to enlighten. The whole thangka uses primarily red and orange paint of a fiery finish. Around him in the central concentric circle are a Buddha and bodhisattvas believed to be from the higher realms. At the bottom appears to be images of Yamantaka, the conqueror of death, stepping on a buffalo. 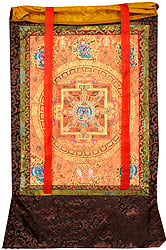