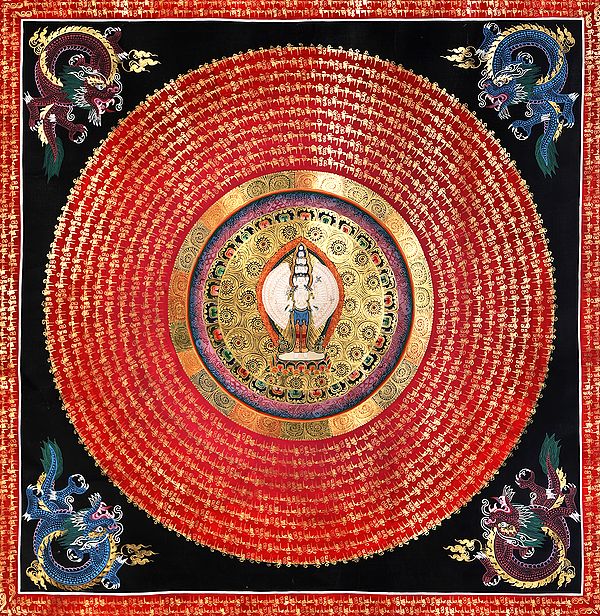 $265
The concept of the mandala is an interesting aspect of Hindu-Buddhist cultures. It translates to ‘universe’ and conveys an especial enclosure perpetuated by elements of a particular deity. The thangka that you see on this page depicts the mandala of Lord Avalokiteshvara. He is the Bodhisattva of compassion, known and turned to for His unflinching succour to the truly devoted.

The pristine figure of standing Lord Avalokiteshvara graces the centre of the mandala. He is clad in a blue and red brocaded dhoti, His multitudinous hands and heads making for a striking, perfectly symmetrical silhouette. A flame-coloured aureole surrounded by a disc of gold. The same is hemmed in with lotus petals in bright jewel tones. A circular panel of thick black lines and curves after the shapes of the Himalayan landscape, and another of gracious patterns in monotone gold.

Upon the scarlet that hems in the mandala of Lord Avalokiteshvara is inscribed the moolamantra of Om-Mani-Padme-Hm. The same is done in delicate gold metallic, which shimmers against the solid scarlet of the background. Against the deep black backdrop are the images of mythical snow-lions in blue and red, one in each corner of the thangka.

Mandala of Tibetan Buddhist Deity Chenrezig with Ashtamangala
Size of Painted Surface 26.7 inches X 26.7 inchesSize with Brocade 36 inches X 41.5 inches
$395
Out of Stock
Add a review
Have A Question