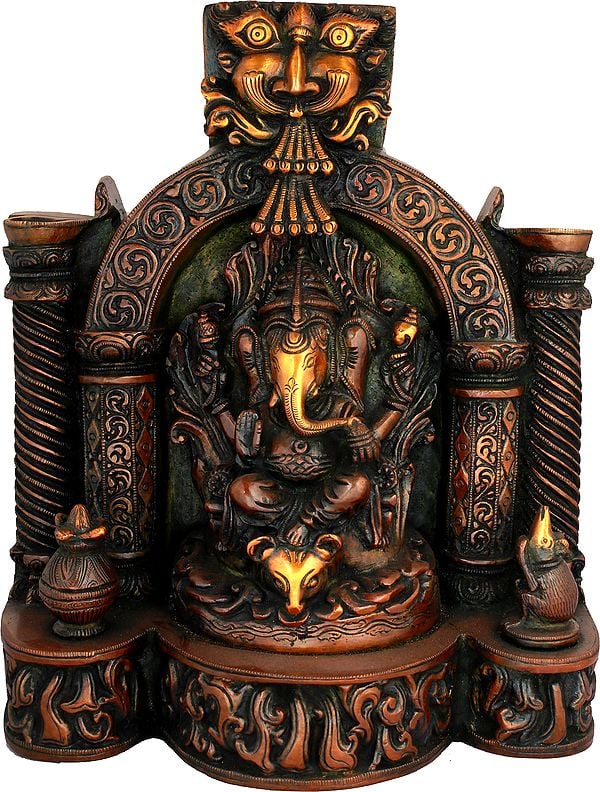 10" Lambodara Ganapati Enshrining Vedika In Brass | Handmade | Made In India

More than 1M+ customers worldwide
This magnificently ornate brass-cast, each form bold and voluminous like members of a massive building-structure but as much delicately carved with various designing patterns ranging from intricate arabesque-type to chased medallions and fluted linear courses, represents the four-armed elephant-god Ganesha in his Lambodara manifestation – a form with extra large belly believed to contain all the universes within it, oceans of knowledge and all stores of riches. Highly auspicious Lambodara blesses with natural wisdom, great common sense, ability to face all kinds of situations, and with abundance. This image of the four-armed Lord has been conceived as carrying in his upper right hand a goad, and in the left, a goad like looking attribute, in the normal left, a bowl of ‘laddus’ which with his trunk laid on it he is gradually eating, and the normal right hand is held in ‘abhaya’.

Lord Ganesha has been conceived as seated on a high seat with beautifully modeled two tiny bolsters on sides supporting his forearms and a fire-arch like looking backrest in a posture known in the iconographic tradition as ‘utkut akasana’ with thighs straightened on front at right angle supporting on them his protruding belly, and the legs down the knees turned at sixty-six degree angle. Apart this protruding voluminous belly held over uplifted thighs and contained by a strong belly-band tied around, the figure of the elephant god is somewhat lean and thinly modeled, obviously for giving the form a more anthropomorphic look. Unlike his usual broad face with front-facing eyes this statue of Lord Ganesha has been conceived with a narrow face, only so much wide as would require an elephant trunk to branch from. The eyes are shifted to sides as in an elephant body. The trunk itself is quite lean and curved simply on the left almost at right angle. Its tip is placed on the bowl of ‘laddus’. Dimensionally the face has greater depth and much less breadth assuming a look of angularity.

This angularity along the central line that defines his conical headdress and the nose-line of the ‘Kirtimukha’ atop creates a delightful symmetry of parts : the right and the left – forehead, large ears, sides of the face, style of shoulders … This magic of symmetry characterizes the entire statue, the seat he is sitting on, the mouse, its base, bolsters his arms are laid on, backrest and the podium carrying the seat, the architecture – arched sanctum patterned with equal numbers of medallions on either side and its identically designed base-columns, massive lamp-posts with exactly similar lamps atop and identically fluted, flanking the main arched structure, and the ‘Kirtimukha’ motif atop. The bunches of five decorative gussets suspending from the ‘Kirtimukha’ – auspicious face, one comprising the centre and two on each side, besides the identically modeled whiskers, beard’s right and left parts, cheeks, eyes and the coils of hair, further emphasize this magic of symmetry.

A pleasant parallelism, as gods and kings of high order used for their official seat a ‘simhasana’ – a seat or throne, consisting of a front-facing ‘simha’ or lion figure, or lion-figures comprising the seat’s four legs, the artist has created here for His Majesty Ganesha on the parallel lines a ‘musakasana’ – a seat consisting of ‘musaka’ or mouse, Lord Ganesha’s mount. In the statue, different from the style of a mount – as a mouse is invariably conceived in Ganapati imagery, the figure of the mouse in this statue comprises the face and the very base of his seat as does a lion-figure in ‘simhasana’. The highly innovative statue uses the figure of mouse, his mount, different from one comprising his seat, like a temple-dhwaja, the emblem of the temple’s sectarian identity. As in a temple dedicated to Shiva his mount Nandi, the bull, is usually installed facing the temple’s main entrance, sometimes in a subordinate structure, and is known as Nandi-dhwaja, this figure of the mouse, the elephant god’s mount, has been installed exactly like a ‘musaka-dhwaja’ on a subordinate podium on the main podium’s left as if suggesting that the shrine is dedicated to Ganapati, its master. The podium on the right side has a ‘purna-ghata’, a highly auspicious object symbolising auspices that abound in the form of Ganesha. 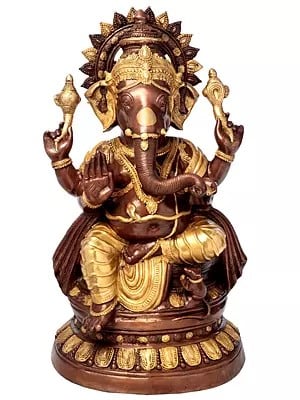 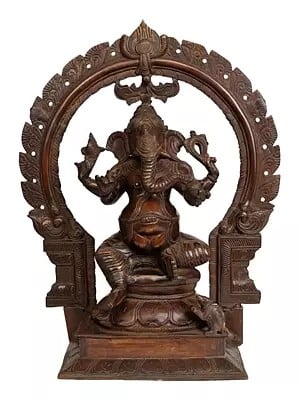 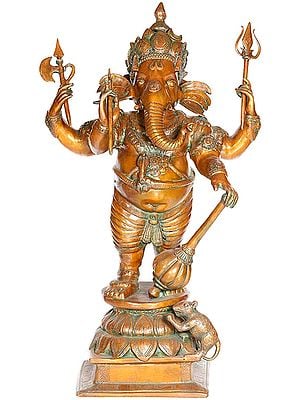 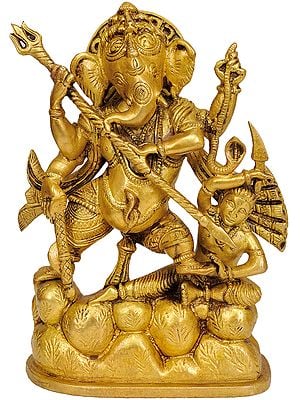 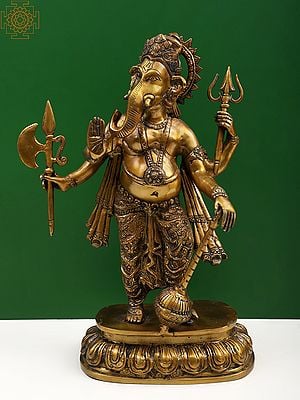 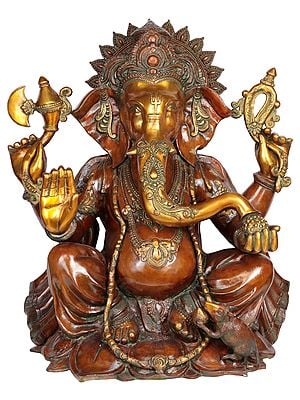 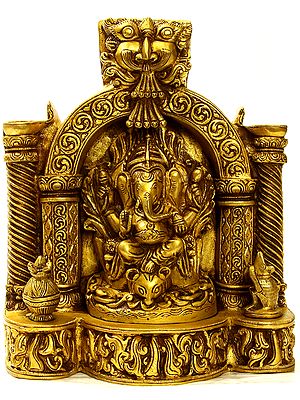 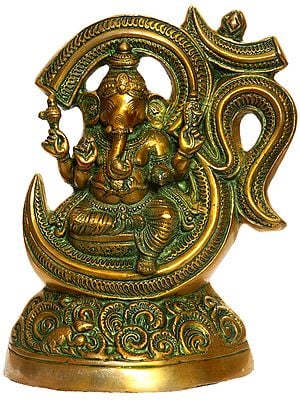 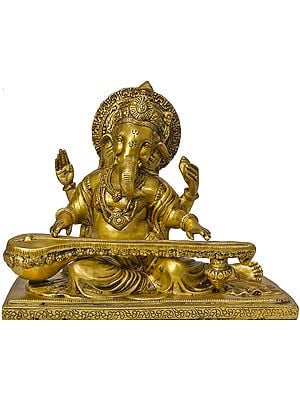 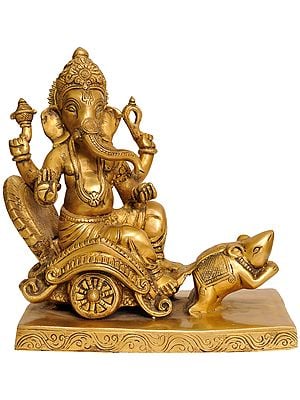 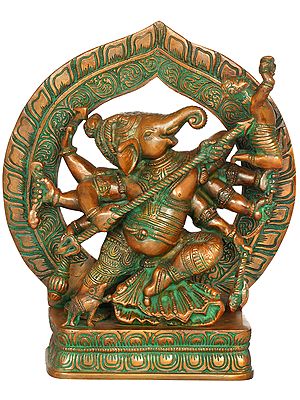 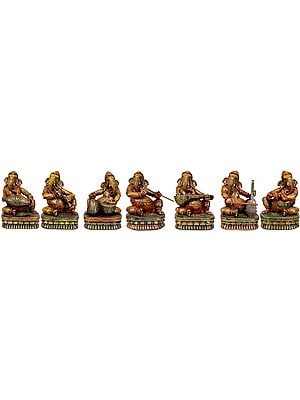 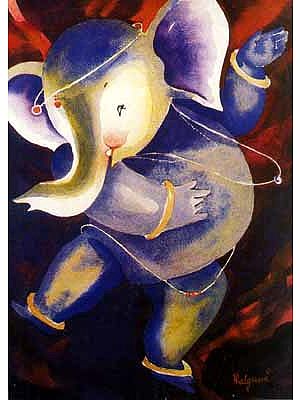 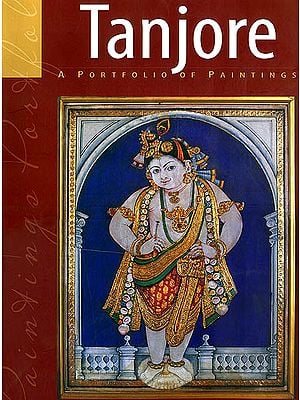 Temples of the Pratihara Period in Central India
By R D. Trivedi
$49
FREE Delivery
Best Seller
Add a review
Have A Question