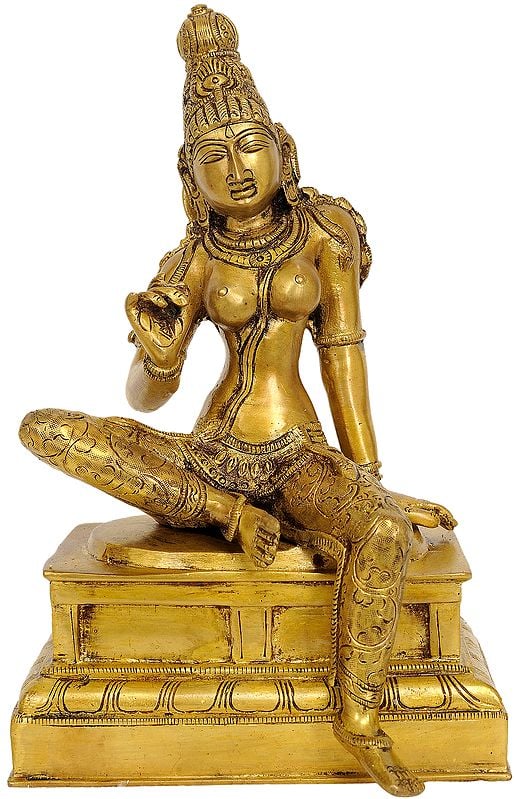 10" Parvati in Lalita Roop: Beauteous Aspect In Brass | Handmade | Made In India

FREE Delivery
$258
Quantity
Ships in 1-3 days
Notify me when this item is available
This great masterpiece, a brass-statue cast pursuing the standard format of the timeless Chola bronzes of South revealing the same level of precision, adherence to finish but without allowing much of resplendence to intrude and mar its natural elegance, figural balance, anatomical proportions and iconographic perception, represents Goddess Parvati, Lord Shiva’s consort, also known as Gauri. Born of Parvata – Himavan, the Himalayas manifest, the goddess gets her Parvati name. Texts revere her as the absolute manifestation of Adi Parashakti – primordial cosmic power, Shiva’s Shakti and his gentle aspect though in her being she manifested both, the wrathful aspect as well as the benevolent; her incarnations as Durga, Kali, Chandi, Shitla, Tara and the Mahavidyas being her wrathful forms, and Katyayani, Mahagauri, Kamalatmika, Bhuvaneshvari and Lalita among others, her benevolent manifestations.

Though unsurpassed in her beauty, female grace and womanhood, this form of the goddess modeled like an ‘Apsara’ – a celestial youthful nymph, seated all alone in an uninhabited corner is quite unlike Parvati. Almost invariably, when she is alone, that is without her spouse Shiva, the tradition perceived her with four to ten arms; it is only when she is with Shiva that she has normal two arms. Strangely, this figure of the goddess is all alone without her spouse and is yet normally armed. Though there are a number of Parvati temples across the land dedicated to her singly dating back to early centuries, in most of them her enshrining images are multi-armed, mostly with four arms. As such, this image seems to represent her in her pre-marital days when every of her thought was devoted as to how she could win Shiva’s love who desperate by Sati’s death was unable to see that Parvati was none other than Sati herself in her new birth. This affords reason to her being with normal two arms even when alone, and for the gesture of her fingers and demeanour of eyes.

The goddess has been represented as seated on a multi-tiered rectangular pedestal consisting of two parts, a three-tiered rectangular base composed of variedly cast mouldings, and an upper, the lower part conceived with conventionalized lotus design, and the top, a plain apsidal moulding, with her right leg folded and contained on the pedestal’s top, and the left, suspending down along the pedestal’s rise, a posture classified in Indian iconographic tradition as ‘Lalitasana’ – a sitting mode revealing great ease and beauty of form. This sitting posture with slightly raised right leg thrown to further right, and left, gently twisted to further left, creates delightful geometry and affords appropriate stance to the rest of the figure. The gestures of her arms, the shoulders’ breadth and projection of breasts attribute pleasing perspectives to this geometrical maneuvering of the figure. The rhythm that the left foot creates vibrates the goddess’s entire figure and adds to it astonishingly delightful dimensions.

The gesture of her right hand : the thumb locked with her forefinger as when engaged in some inner dialogue, the three-fourth closed eyes and the way her left hand rests on the pedestal, suggest that she is engaged in some inner dialogue or is in meditative trance. Her figure has been conceived pursuing the high standards of iconography : round face, well fed cheeks, rounded chin, large eyes with arching brows, sharp nose, cute small lips, elongated earlobes and a well defined neck, besides a perfectly balanced anatomy, broadened shoulders, sensuously modeled breasts, subdued belly and a bit voluminous hips. She has on her head a towering crown revealing Vaishnava character, an elegantly pleated ‘antariya’ – lower wear, and a few selective ornaments to include those on the neck, breasts, arms, ears and feet.