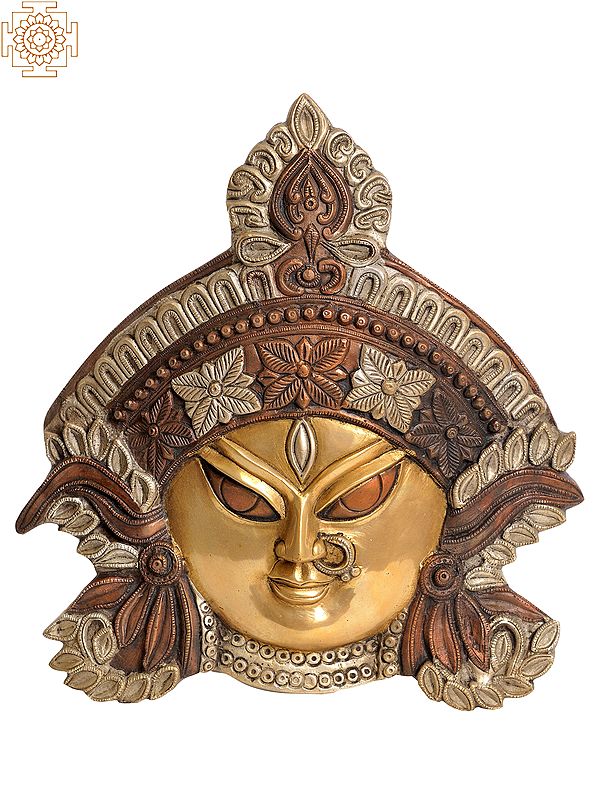 ﻿This lustrous wall hanging, a brass plaque cast with an ornament like fine details as the brass like hard and uncompromising medium would yield with great difficulty, revealing rare beauty and charging the ambience with spiritual fervour, represents goddess Kali. The image of the goddess has been conceived as a wall hanging. The brass-piece is both, a ritual image as well as an art object. When the space to adorn or to sanctify is the lintel or the face of an entrance, or its side planks, or when it is a space insufficient to accommodate a full image, a deity-plaque is the best option for adorning it. Aesthetically cast it beautifies a space, and by representing the most powerful divinity of Indian pantheon it spiritualizes the ambience with its divine aura. Similarly cast papier-mâché plaques of the goddess flood the markets in Bengal, as also other parts of thecountry, during Durga-puja festival. In Bengal one cannot find even the humblest of a hut without an image of Kali and to a larger part of populace a plaque is her most preferred form. From a clay-cast – the humblest, to a gold pendant – the richest, one can find such deity icons in an affordable medium.

The representation is typical to the Bengal cult that perceives Kali as Durga. It conceives the goddess with the same luminous fair-complexioned image – cast in a metal or produced in colours, as has Durga; however, for representing Kali in her own form as it enshrines other traditions of Kali imagery the artist has shaded with black tint the face of the goddess though he seems to have taken extra care to ensure that its lustre is least affected. Though the use of the black dye is just symbolic, a fine artistic manipulation this bit of lampblack like shade rubbed on the luminous face of the image has only further beautified it, perhaps by minimizing its extra lustre. A symbolic icon : a partially revealed face, the forehead covered under the crown, and the neck, behind a necklace, the brass-piece, besides representing the great goddess in her two manifestations Durga and Kali, also represents with utmost thrust two most venerated art traditions of Bengal, one, the classical tradition of Pala bronzes, and the other, the Kalighat tradition of Kali images.  While in its finesse, precise details, technical maturity and perfect execution, rare finish, delicately worked image and its overall quality it pursues the timeless idiom of Pala bronzes of early medieval centuries, in the adornment of the goddess that with its far greater proportion and emphasis dominates the image it pursues the folk line of the 19th century Kalighat art idiom still live in all forms of art in Bengal. Unlike other folk art styles the folk element in Kalighat tradition is extremely decorative, observes geometric accuracy and produces rare aesthetic effect. The face of the goddess : the lower half, angular, and the upper, a semi-circle, prominent cheeks, eyes and eyebrows, raised upwards slanting at hundred twenty\ degree angle, and large awe-inspiring eye-balls, heavy lips and bold nose-ring, is typical to Kalighat folk style. The multi-tiered form of the crown with a temple-top that adorns the deity-image has almost rigidified in Kalighat style of the image of the goddess. Though incised with minute details and highly decorative in character the style of flowers, consisting of four leaves, not petals a flower usually consists of, the crown’s other sections, locks of hair and ear-ornaments all consisting of leaves or ferns are typical of Kalighat folk style.

This description by Prof. P.C. Jain and Dr Daljeet. Prof. Jain specializes on the aesthetics of ancient Indian literature. Dr Daljeet is the chief curator of the Visual Arts Gallery at the National Museum of India, New Delhi. They have both collaborated on numerous books on Indian art and culture.
Add a review
Have A Question