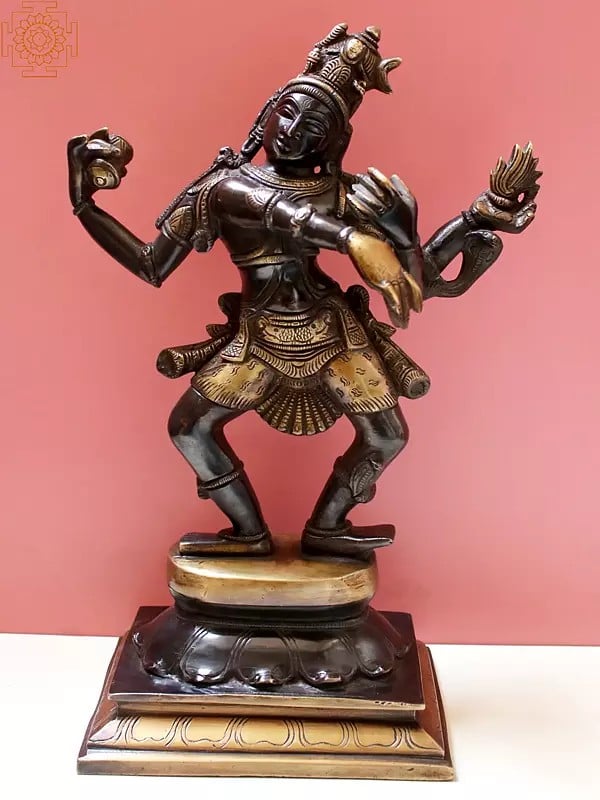 13" The Dancing Shiva In Brass | Handmade | Made In India

Lord Shiva is revered as one of the Supreme Beings who creates, protects and transforms the universe. He as a great acetic concentrates on meditation as a means to find perfect happiness. This brass statue depicts Lord Shiva performing his cosmic Tandava called Anandatandava, on a stylized lotus pedestal; although posture of his legs is unusually carved while in Tandava, but the hand mudra and that expression of eternal bliss symbolizes the cosmic rhythm of birth and death. The vibes arousing from this dance creates an interplay of dynamic and static flow of divine energy.

Exotic India provides you with an amazing collection of this sculpture in two unique colors of glossy blend of brown and gold giving it an antique look and a smoky grey body all adorned in light green and bright golden hue. Shiva is garbed in a short golden dhoti chiseled in beautiful patterns along with a thick ethnically carved kamarband that has its ends flowing from the sides; along with an ornamentation of lavish jewels, he is also ornated with serpents, coiled around his hand and leg as a symbol of him overpowering death (snake symbolizes death).

Chaturbhuja holds a damru and fire in his posterior hands identifying the sounds of cosmic energy and destruction for purification respectively. This sculpture is glorified with a haloed long crown decorated with a crescent moon on the right and Ganga in the centre to splash its religious waters.