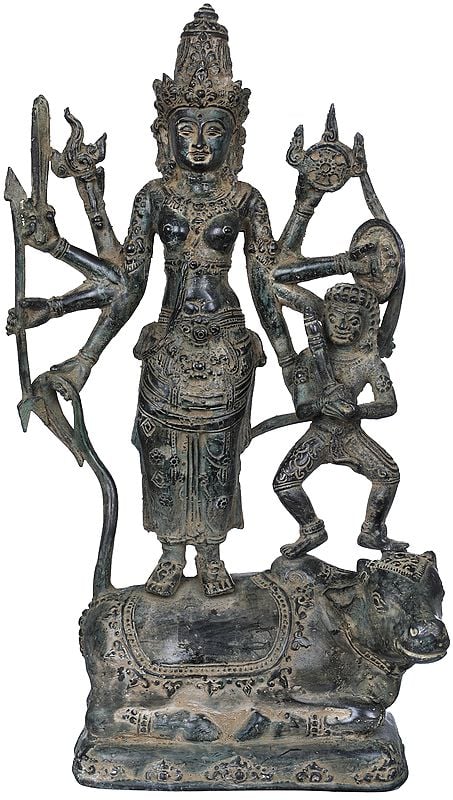 Durga-Mahishasurmardini, the Hindu mother goddess who battles the demonic forces and rescues her children is a popular deity not just in India, but in the rest of South Asia as well. Mingling with the local legends and beliefs, Maa Durga took new, magnificent forms, all the while remaining the protector mother. One such form of the great-goddess is known as Bathari Durga or Chandi in the island nation of Indonesia- a receiver of the Hindu religious influence by the great Hindu sage Markandeya, the writer of Devi Mahatmya, a cardinal text of Shaktism.

An amalgamation of Hindu, Buddhist, and local traditions in brass, this Durga statue is locally known as Loro/Roro Jonggrang or slender virgin due to her physical appearance as a slim and youthful woman. While the distinctive-looking crown, ornamentation, and facial expressions are quintessentially Indonesian, the principles encapsulated in this brass murti are essentially Hindu. Durga is shown as Ashtabhuja or eight-armed with different weapons in her hands. She is accompanied by Bhairava, a fierce form of Shiva, the consort of Parvati-Durga. Together, the powerful duo vanquishes all evil whenever the situation arises. Accompanying her, but secondary to her, Bhairava is shorter in comparison to the brilliant form of Durga. Both of them stand atop the Nandi bull, vahana of Shiva, with the goddess gently holding his tail. Charming ethnic motifs on the clothes of Durga and Bhairava as well as on Nandi bring out the beauty of South Asian art. Appealing and divine, this brass Durga idol is an aide-memoire of the goddess’ journeys outside India.