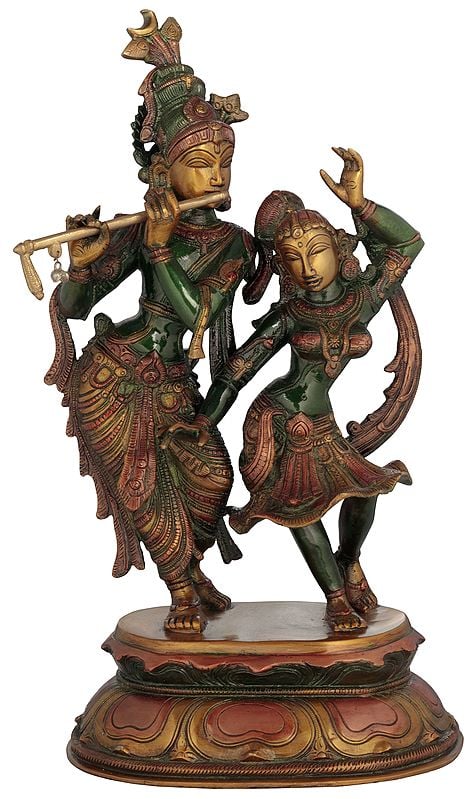 More than 1M+ customers worldwide
Cast of finest brass with gold-like depth and natural lustre, rare in finish and quality of image, this statue, a magnificent example of packing into a tough medium the fluidity of a rivulet and the pace of winds, represents Radha and Krishna engaged in dance. Fully absorbed Krishna is playing on his flute letting his form twist to its melody, float on it, or submerge. The divine ecstasy that the melody of his flute generates vibrates also the Radha’s figure and it moves as moves Krishna’s in absolute harmony and with equal zeal. A strange and delightful parallelism, Radha’s entire figure and every member : legs, hips, belly, breasts, shoulders, arms, head …, bends, curves or moves exactly as moves the Krishna’s corresponding part.

Essentially a dance-mode, the figures of both Radha and Krishna, moved to create rhythm, are curved a little more than a ‘dvi-bhang’ – the two-curved posture, and a little less than ‘tri-bhang’ – the three-curved. The same as Krishna’s, Radha’s right leg, along with right hip, is thrown to further right and the foot is set flat on the pedestal. Her left leg, like Krishna’s, is differently poised. With toe laid on the pedestal and heel raised the foot is upwards lifted. Along the knee the left leg has a forward thrust and the leg’s upper part along the hip or waist is pushed to right. Exactly parallel to Krishna’s, Radha’s figure from the waist to shoulders, to include belly and breast-part, is bent to left, her sensuously moulded left breast almost completely thrown out. The heads of both, and the Krishna’s crown, and the Radha’s coiffure, are tilted to right. Though a simple geometry : one figure moving along the other in harmonious moves of dance, the artist seems to discover in their figural dimensions a cosmic parallelism. The universe : matter and its enlivening self that Radha symbolises, seeks all its stretches, of mind or physique, in the mood, mode, twists, curves, thrust and every movement of Krishna, the Supreme Being whose reflection the universe is.

Overwhelmed by the melody that emits from Krishna’s flute the feet or rather the entire beings of both, Krishna himself and Radha, in great ecstasy and spontaneously, move to dance. Gentle and contained, not boisterous or even exuberant but delighting, in their moves reveal divine grace and great aesthetic beauty. The pace of dance-moves manifests in the contours of Radha’s skirt that winds like a lotus leaf that surges with ripples of water it floats on. Drawn like a bow Radha’s sash, her upwards raised left hand with fingers attuned to the melody emitting from Krishna’s flute, gesture of her right hand, gently twisted belly and well swelled breasts, the form of her hair and her emotional bearing : a face glowing with ecstatic delight, eyes shut in absorption and arched eyebrows, all reveal the ecstasy of dance. Radha’s figure has been elaborately bejeweled using beautifully and exclusively designed ornaments : large ‘kundalas’ – ear-ornaments, armlets, a wide range of necklaces, sensuously conceived breast-band and a beautiful girdle with a brooch designed like the peacock feather.

The dance, its absorption, ecstasy and delight, manifests as powerfully in Krishna’s form as in Radha’s, though with his hands engaged in playing on flute the ‘bhava’ – emotion, such as Radha’s figure reveals in the gesture of her hands, does not reveal in Krishna’s body-moves. He has been represented as wearing a splendid tall Vaishnava crown. In a delightful deviation from the established tradition , unlike the crown of Lord Vishnu in his proto form, this crown of Krishna is crested with a pair of peacock feathers and with the crescent form atop. Peacock feather is his own motif, but crescent, Shiva’s, maybe, included for a wider acceptance or to portray the divine breadth of Krishna’s being. He has a Vaishnava ‘tilaka’ mark on his forehead but has not been represented as putting on Vaijayanti, the garland of Parijat flowers, one of the most characteristic attributes of Lord Vishnu. Krishna’s flute, adorned with a pair of bells, used for ornamenting cattle, is denotative of Krishna’s cowherd links, though his most lavishly conceived ‘antariya’ – lower wear, has as strong stateliness of being Vishnu’s incarnation.