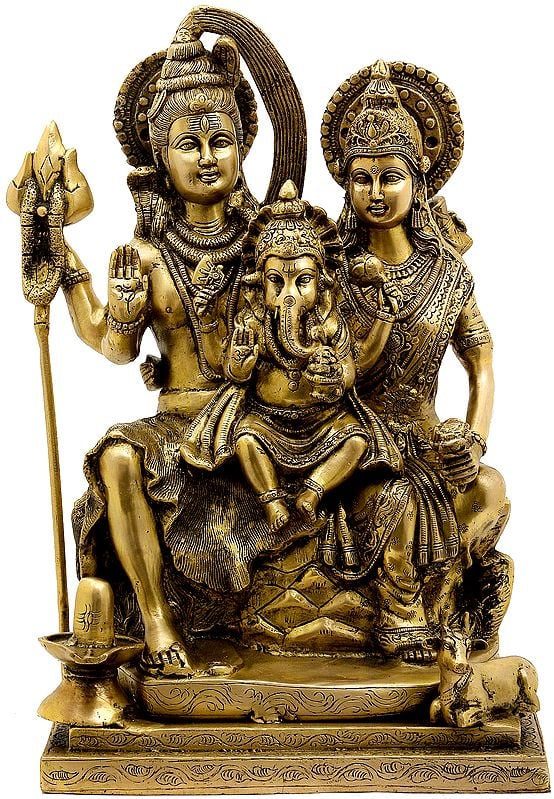 17" Shiva Seated With Parvati Next To Him, Ganesha On Their Lap In Brass | Handmade | Made In India

This sculpture depicts Shiva’s family, a perfect example of a loving and contented bond, sharing harmony with each other despite having antagonistic natures. Just as the five fingers of a hand are not alike but can do any work effectively when joined together, similarly, despite being conceived in different forms, they are a primary symbol of unity and oneness.

Perched happily on Shiva’s abode, Mount Kailash, formed here on a scribbled three layered pedestal with Shiva’s sacred mount Nandi resting on left and Linga (Shiva’s aniconic form) on the right. The auspicious one (Mahadeva Shiva) sits in blessing posture on the right, holding his revered trishula, the deadly serpent coiled round his neck and the pious river Ganga flows out from his matted locks; he represents energy and is worshipped as the primitive deity of the cosmic Trimurti.

His beautiful consort, Goddess Parvati, garbed in a finely draped alluring saree carries lotus, a symbol of purity, similar to her nature and the other hand wrapped around her husband’s waist as a mark of togetherness. Shiva and Parvati represent the ideal couple for love, respect and honour; carved here in mesmerized briefings of expressions and other accessories.

Not to forget, Lord Ganesha, their elephant headed son, sits in the centre on Shiva’s lap in a blessing of fearlessness and carries his favourite bowl of laddoos in the other hand. Ganesha, the primeval and friendly god is an embodiment of buddhi (intellect) and siddhi (fulfilment). All moulded in benevolent form and pleasing personalities; highly ornamented in beautiful crowns and jewels glorifying their persona.