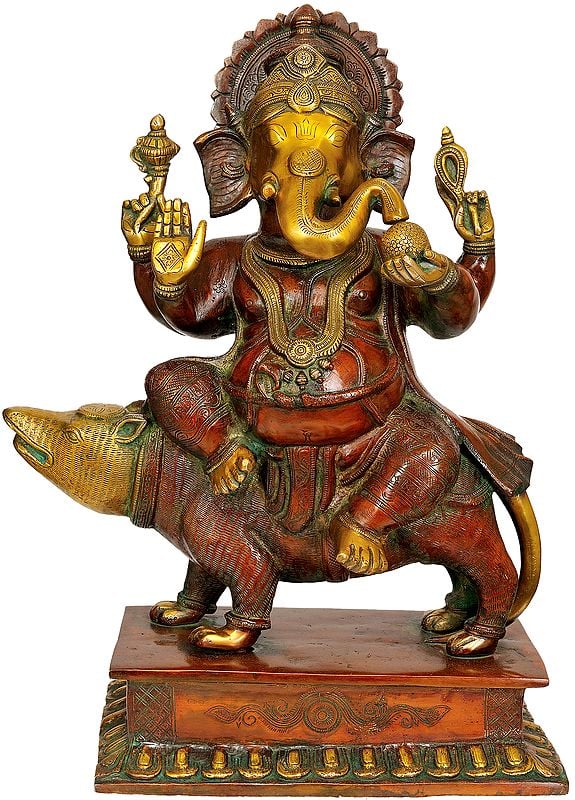 18" Ekakshara Ganapati In Brass | Handmade | Made In India

This brilliant four-armed image of Lord Ganesha, seated on his mount mouse, not tiny as it is in most of the sculptures representing Lord Ganesha but more like a bear, large in size modeled proportionately to the volume of the rider’s figure, full of energy and endowed with pointed sharp muzzle, represents the elephant god in his Ekakshara – single lettered manifestation. As if consisting of fire the mount’s body colour is like fire not in flames but as ablaze within.

Ekakshara Ganapati rides his mount mouse, though as prescribed his usual seating posture as Ekakshara Ganapati is ‘padmasana’ – lotus posture, not ‘utkut anasana’ as in this image. The mouse with its sharp fangs digs its path even across a mountain. As such, Ekakshara Ganapati enables his devotee to wade across even tumultuous oceans, that is, find his path even in the toughest of the situations. Rare in adhering to classical norms, this four-armed image of Ekakshara Ganapati is red-complexioned except some parts that for visual effect have been gold-polished, besides he is clad in red. As prescribed, Lord Ganesha is carrying in three of his four hands elephant goad, noose and pomegranate, and the fourth is held in ‘abhaya’. Dear to his father Shiva who is one and the entire cosmos merely his manifestation Ekakshara Ganapati is endowed with Shiva’s ‘tri-netra’ – third eye, and also has on his crown his crescent. In the statue the mark of Shiva’s trident alternates ‘tri-netra’, and the crescent motif seems to have been left out for technical reason, mainly the statue’s sustainability for a tiny motif like a crescent might not sustain during its shifting or transportation.

Summarily, in the brass-cast – unique in its overall perception, the artist has combined with classicism aesthetics of contemporary modeling : right proportions, plasticity, beauty, realistic treatment of the subject, majesty appropriate to the great Lord, balance and divine composure. But for the two figures to match proportionately the artist has enlarged the size of the figure of the Lord’s mouse; the right and the left to the statue’s central line have been conceived to reveal rare symmetry, visually as well as volume-wise; and for balance on the horizontal scale – the hind part to match the forepart, the artist has modeled his figure of the animal with a bow-like curved tail, more voluminous than the usual, for gaining greater breadth and to match the muzzle’s length. For an image of Lord Ganesha in Ekakshara manifestation ‘padmasana’ is the usual mode of seating; however, such mode is largely unrealistic at least for seating on an animal’s back. In the statue the artist has hence changed the seating mode to ‘utkut akasana’ that allows both legs to variously stretch and hold on the mount’s back and better balance the figure – a somewhat realistic posture. Unlike his usual images modeled with a pot-like belly the belly’s volume in this image is better managed and more amicably holds on the mount’s back and on the rest of his figure.

The image of Lord Ganesha has been installed on a rectangular platform with medium height. Except its base-moulding which tapers in upward rise along stylized lotus motifs the rest of the platform consists of plain mouldings that on the top with projecting edge on all four sides being better finished. The Lord’s mount stands on it with all four feet firmly planted. Exactly in the idiom fixed for divine icons Lord Ganesha is seated front-facing with one of his legs suspending down, and the other, gathered on the mount’s back close to its neck. He has his all four hands lifted, the upper ones carrying noose and goad, normal left, a pomegranate, and the normal, held in ‘abhaya’. The four arms are the main instrument for balancing his figure. His figure has been elegantly attired in a brownish red upper wear and a ‘dhoti’ of the same colour. His trunk is artistically curved and raised to shoulder height, and its tip, directed to the pomegranate that the elephant god carries in his normal left hand. Besides the usual ornaments Lord Ganesha is putting on a large crown with a halo-like back plate. 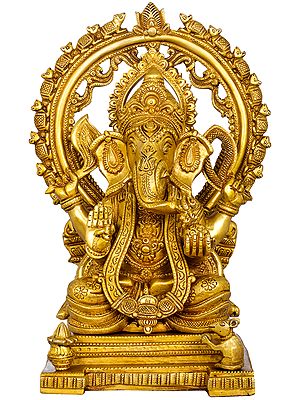 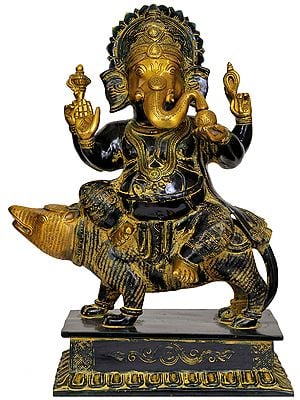 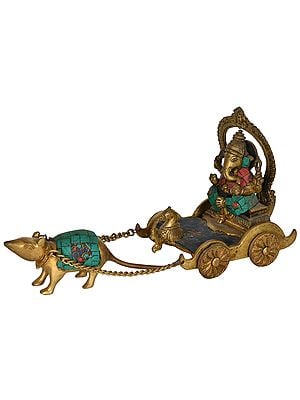 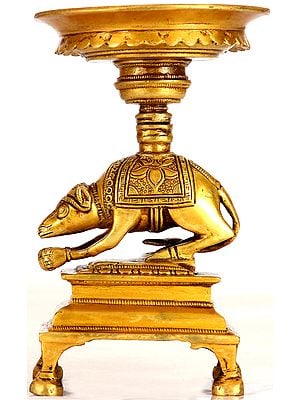 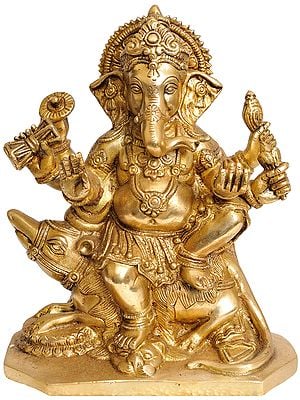 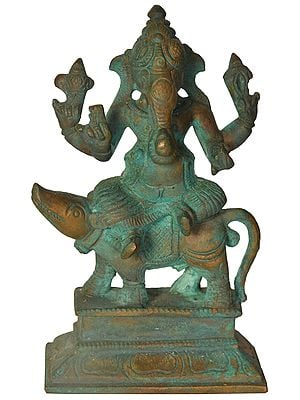 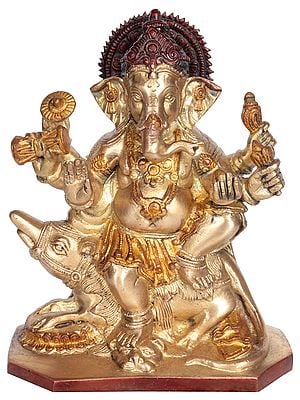 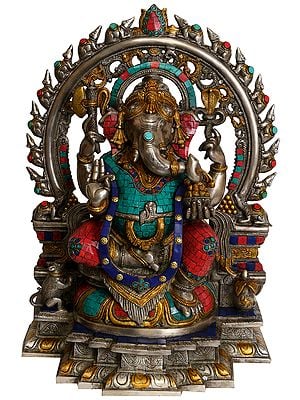 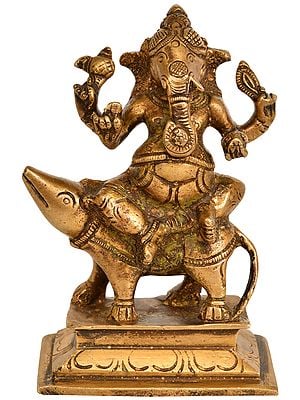 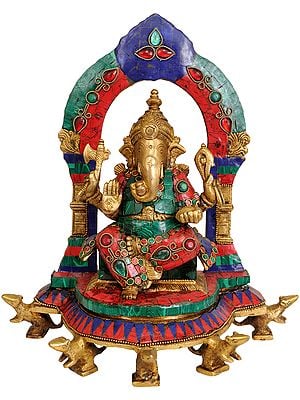 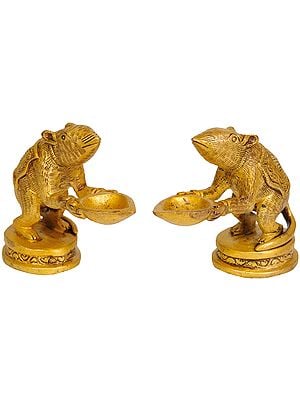 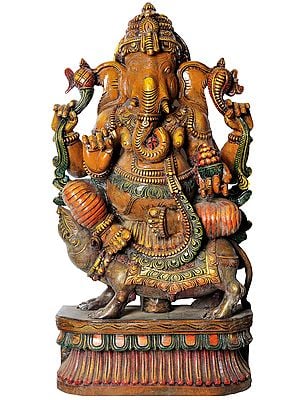 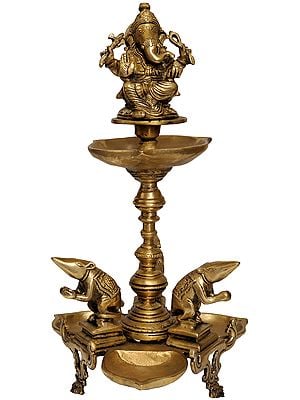 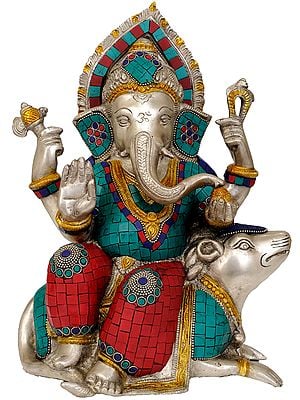