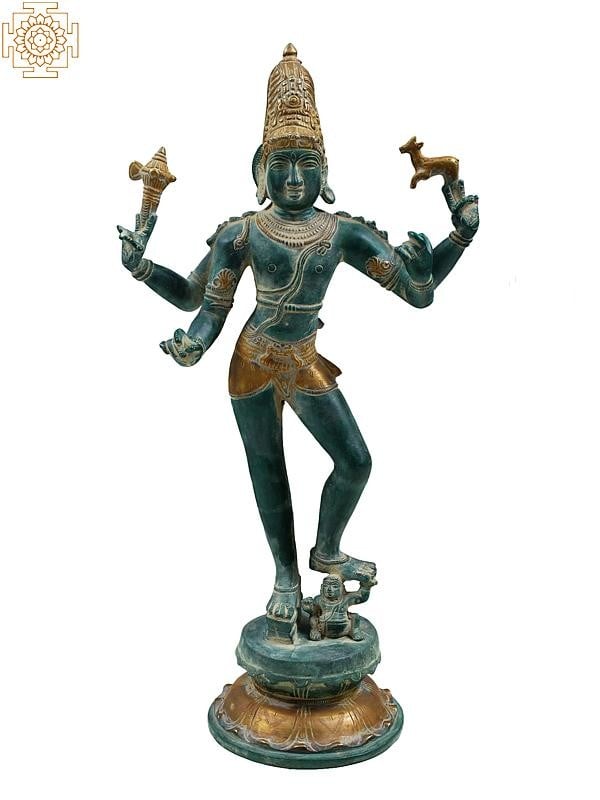 19" Lord Shiva as Pashupatinath In Brass | Handmade | Made In India

Lord Shiva is venerated as the primordial teacher of both dance and music. As the master of dance, he is deified in the immortal iconography of Nataraja. This particular image presents him as the master of music, and is known as 'Vinadhara Dakshinamurti'. The term 'vinadhara', means 'holder of the lute', and the term 'dakshinamurti' presents Shiva as a teacher. Not only just a player of music, Lord Shiva is regarded as the very nature of the seven notes (swara) in the system of Indian classical music. He is the embodiment of primordial sound, and taught grammar by the beat of his drum to the greatest linguist ever, Panini. According to the Mahabharata, it was he who taught music to sage Narada. In this great epic he is the god who imparted to humanity the knowledge of the sixty-four arts.

In the typical iconography of this form, Shiva invariably has four arms, of which the frontal pair is in the position of playing the vina, which is always missing. The other two hands carry the battle-axe and antelope, respectively.

Standing on a lotus base Shiva strikes a graceful posture. Richly ornamented, he wears the sacred thread across his shoulder, and a short loin cloth (kaupeen or langoti) typical to Indian saints who have given up material life. He wears a tall elegant chignon, and a third eye is etched on his forehead. The figure of the Great God is slender and lissome, befitting the greatest musician ever.