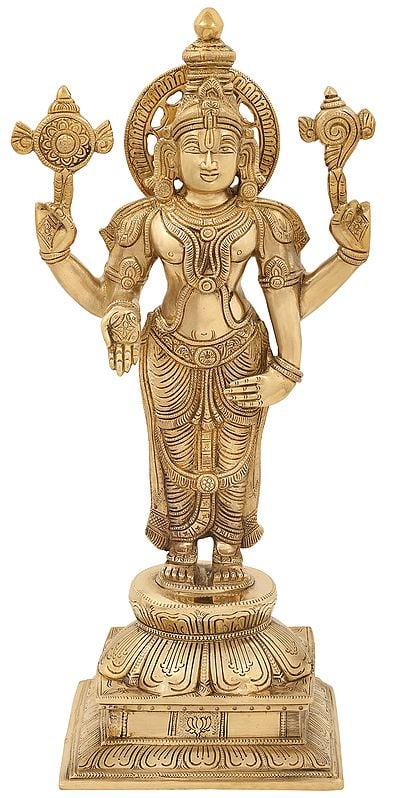 Lord Venkateswara is revered as an incarnation of Lord Vishnu who presides in his abode at Tirupati in Andhra Pradesh. People at Tirupati believe that he is still alive, as being experienced some of the miracles in the temple. Lord Venkateswara, also known as Tirupati Balaji blesses devotees by keeping them away from all the troubles of life. As per the popular depiction, Lord Venkateswara is shown in a stone image, as it is believed that he manifested himself into a stone on being confronted by his wife, Goddess Lakshmi after she learns of his marriage to Padmavathi. But this brass sculpture of Tirupati Balaji is carved in a charming human form, symbolic of his divine presence everywhere for his devotees.

Even a few seconds of darshan of the Lord are enough to witness his marvellous aura. Lord stands here on an inverted lotus carved platform which is kept on a double-layered pedestal having elegant lotus flower patterns along the circumference. A realistic essence of his divinity can be felt as you stare at the précised carvings of Venkateswara’s facial expressions. All four palms are beautifully chiselled with a sacred flower pattern. The rear hands carry Lord Vishnu’s iconographic symbols of a conch and disc and the exquisite mudras of his anterior hands say more than what is perceived. The right anterior hand is in Varada mudra symbolic of the Lord bestowing his devotees with blessings and left anterior is postured at the hip level in Katya Vilambita mudra is symbolic of the complete faith in him controlling the floodwaters of bhava sagara from going beyond hip level.

The detailed carves of his necklaces complements the beauteous patterns formed on his jewelled dhoti. Note the stylized pattern of his ears decorated with round kundals and the tilakam on the forehead is symbolic of him controlling life and humanity. The long, multilayered structure of Venkateswara’s charming flower haloed crown is a stupendous representation of the sculptor’s creativity and a hint at the carving style of South Indian temples.