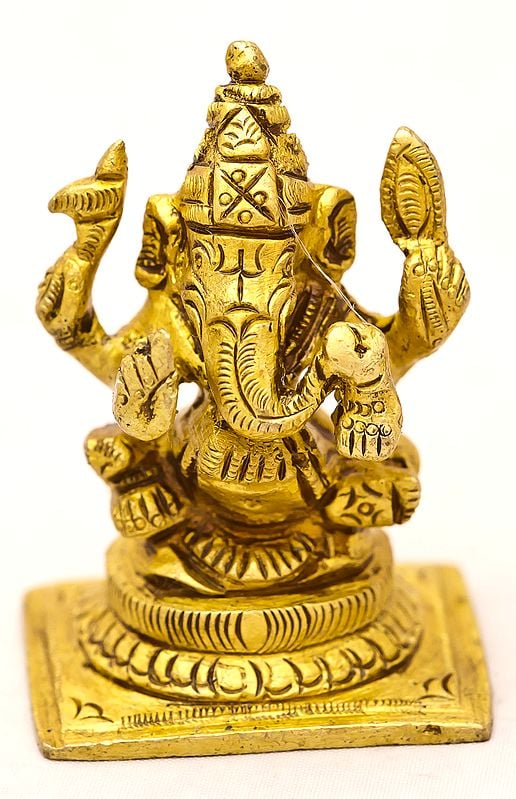 2" The Benevolent God Ganesha In Brass | Handmade | Made In India

Lord Ganesha has a special place in the very heart of Hinduism. He is one of the few gods who is worshipped across the length and breadth of India, irrespective of caste, race, language, and region. Being the son of supreme lord Shiva and Devi Parvati, he is always shown as full of love and benevolence towards his devotees. In the Hindu Epics and Puranas, he is illustrated as a very thoughtful deity with divine intelligence. The rationale is his biggest weapon using which he strikes down the existence of falsehood. It is worth mentioning that Lord Ganesha is always depicted with the head of an elephant. That is because his human head was severed by lord Shiva which was later replaced with the head of an elephant. Being full of love and compassion, the benevolence of Ganesha is unparalleled. That is also the reason he resides in the very heart of his ardent devotees.

This small statue too portrays the benevolent aspect of the multifaceted god. The statue has been crafted in a way that the very posture and expression of the lord embodies great compassion and benevolence towards anyone ready to open his heart to him. Crafted very diligently, the statue shows the god in a four-handed form sitting upon a platform. He is holding various weapons, a Modak (his favourite sweet) and Abhaya Mudra in his hands, to bless his devotees with courage and fearlessness. The carvings are simple in their expression, yet add a very classical textured feeling to the statue. Adorned with minimal jewellery, the glory of the Lord shines through the beautiful colours of the statue. The statue being small, looks very cute and charming, so much so that its enchanting size has become its most distinctive feature. The benevolence of lord Ganesha combined with the brilliant craft of the artist has produced a really alluring work of art.