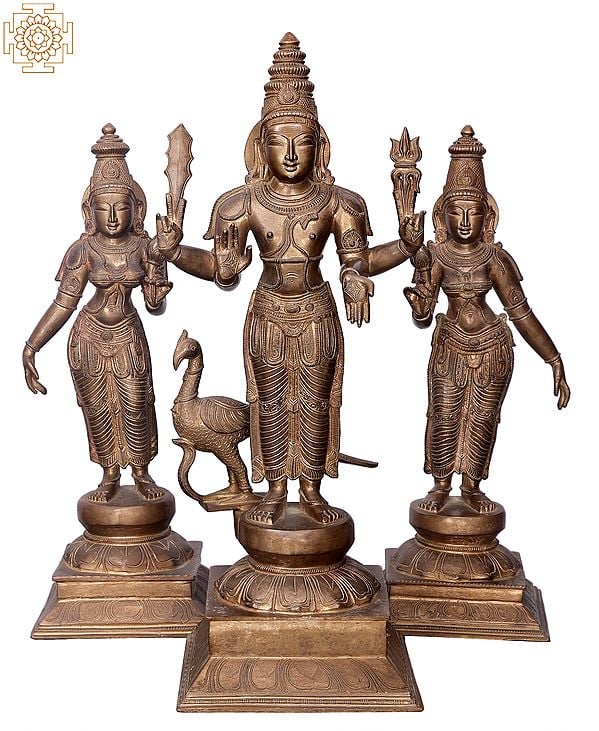 A bronze Karttikeya ensemble is a fine example of contemporary South Indian sculpture. It comprises three standing murtis: the Lord Karttikeya Himself is flanked by His wives, Devasena and Valli, each lovelier than the other. While Devasena is the daughter of the great Lord Indra and His wife, Shachi, Valli is the daughter of Sage Sivamuni. The three deities are standing on identical pedestals made of lotuses turned upside down on quadrilateral plinths.

Karttikeya is at the very centre in His chaturbhujadhari (the one possessed of four arms) form. His vahana (divine mount), the peacock, stands at an angle behind Him. From between the legs of the peacock emerges a snake. It raises its hood all the way to the breast of the peacock, turned in the same direction as the vahana. The symmetrically formed Devis look on with devotion for their Lord and compassion for those who turn to Him.

Made by the ancient lost-wax method (as old as the Agamas wherein it has been expounded under the name of madhuchista vidhana), this composition features remarkable attention to detail: from the plumage of the peacock to the pleats of the deities’ dhotis as well as the engravings on their tall crowns. In addition to this, the panchaloha medium (mix of five iron-based alloys) gives the composition a unique metallic shimmer.