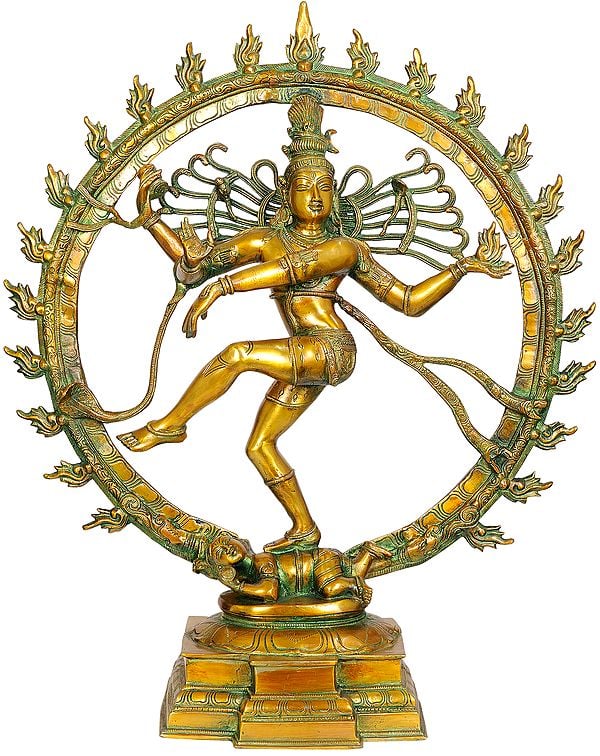 25" Shiva as Nataraja In Brass | Handmade | Made In India

Best Seller
FREE Delivery
$735
The image of Lord Shiva in the middle of His tandava (ritual dance) is the most popular of all Indian iconographies. Nataraja in Sanskrit means the 'king of the art of dancing', and indeed He is hailed as the proponent of all forms of dance expounded in the natyashastras (classical Indian dance texts). When the destroyer breaks into tandava, all the realms of existence are said to tremble afore His vigour. A bejewelled Nataraja in nothing more than a loincloth is the quintessential symbol of Indian culture, which would make an unmistakably prized addition to your space. The damru and the agni in the posterior arms signify the creation (damru emits the om, the syllable that was the beginning of creation), preservation, and destruction (fire consumes all) of the universe, all three of which culminates in His tandava. His frontal arms are in the mudras of protection and fearlessness, while He crushes beneath His feet a cretinous mortal, symbolic of worldly ignorance. His tresses fly in the air, as the rest of Him dances enrobed in snakes. Note the step-ridden pedestal and the lotus upon which is perched the figure of the Nataraja.
Quantity
Usually ships in 10 days
Notify me when this item is available
Add a review
Have A Question