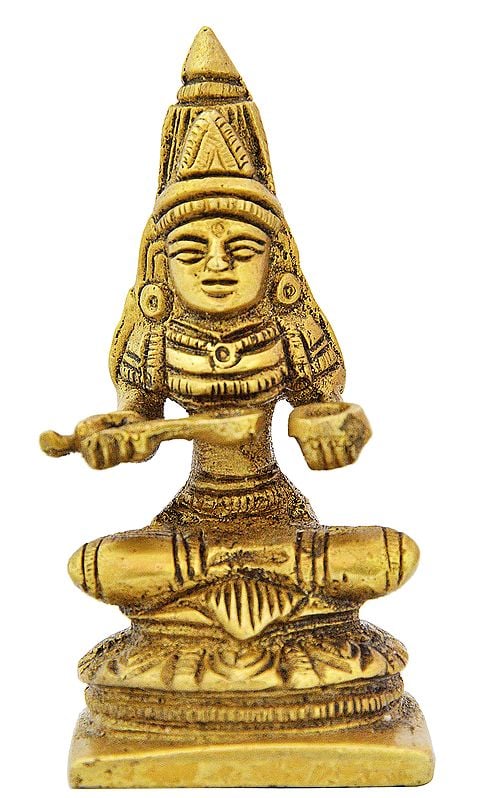 3" Devi Annapurna (Small Statue) In Brass | Handmade | Made In India

It was during a leisurely game of dice between his wife and himself that Lord Shiva lost everything, including his trident and the clothes on his body. The game soon transformed into a debate, to stop which Lord Vishnu had to intervene. He and Shiva put forth the point that there was no use fighting over a mere game since everything in the universe were Maya or illusion, including food. Goddess Parvati, the mother of all life on earth, was deeply enraged by this. She disappeared in a bid to show the two divinities the value of food.

It was understood that though detachment from worldly pleasures was the final goal of all, food is the fuel of the human body in this journey, and it cannot be sidelined as an illusion.

We have the famous goddess Annapurna in brass here, a compact metal statue, with adornments as simple as the message this incarnation contains. Devi here is sitting cross-legged on an inverted lotus, an attribute of goddess Lakshmi, who is also associated with the abundance of food and the fertility of the earth. Her slender body is decorated with simple jewellery and a kirit-mukuta/crown highlighting her status as a divinity.

A famous saying in Hindi- “bhookhe bhajan na hoye Gopala”, meaning one cannot sing hymns when one is hungry rightly brings out the illustriousness of Devi Annapurna.