A bit differently conceived, mainly in its stark formalism and the style of its halo modeled with saw-edge like circumference – an element of Roman sculptures widely used in the statues of goddess Liberty in the entire Europe and America as also in Indian sculptures now for some time, though not without some variations, this brass-cast represents the four-armed Lakshmi, the goddess of abundance, prosperity, riches, accomplishment and sustenance as also represented supreme beauty and absolute womanhood. In goddess Liberty and other European statues the number of radiating rays is invariably seven seen as symbolising seven oceans, or continents and similar other material entities; the Indian sculptors did not restrict to such number, perhaps because under Indian thought such diverseness was not valid.

Quantity
Usually ships in 10 days
Notify me when this item is available
Indians considered the Brahmanda, however abstract, as a single entity, and sometimes, even as the manifestation of Brahma or the Supreme. Obviously, a divine entity like Lakshmi could not be made the instrument of diversifying what is otherwise an indivisible whole. In Indian adoption of the feature the multiplicity of rays symbolised burst of energy or divine aura radiating in innumerable rays.

The stark formalism that defines this statue of the goddess is the more characteristic idiom of her votive images cast in South Indian iconographic tradition. The sanctum images of Lakshmi, more often named Shri or Padmavati, enshrining independently a number of South Indian temples, are often the similar formally standing icons. In north such images of Lakshmi enshrine the sanctums only with Vishnu, the form being known as Lakshmi-Narayana. However, the formal character of this image, or those in South Indian idiom, is more pronounced. The Lakshmi images in Lakshmi-Narayana temples are often a bit emotionalized. Apart the wide open eyes of the goddess looking straight into the eyes of the onlooker with the power to captivate or even hypnotize, this image, or even those in South Indian style, do not have even the faintest trace of emotionalism in her bearing.

Not merely barring emotions, cast in adherence to anatomical and iconographic models of formal votive images, the figure has neither been vested with any kind of body gestures nor any inclination to act. Except a pair of lotuses held in two of her hands, and other two, held in ‘abhaya’ and ‘varad’ : none indicative of her involvement in an act, the image of the goddess has not been made to carry anything : an attribute, weapon …, that represent her operative aspect. The body’s right and left parts are not merely identically conceived but are also in perfect symmetry as cast pursuing accurate geometrical principles. Essentially a votive image, the statue represents the goddess as the non-operative boon giver in the line of the boon-giving Mother Earth or mother goddess or any of the auspicious deity, something diagonally opposed to her form as Mahalakshmi enshrining the great text the Devi-Mahatmya in the Markandeya Purana that perceives her as prime force of the battlefield.

The four-armed goddess is holding lotuses in her two upper hands, while the normal right is held in ‘abhaya’ – granting freedom from fear, and the normal left, in ‘varad’ – accomplishment of all desired. In spiritual analogy the upper hands are considered as reaching the unseen zones, within and without, inherently drawing from there divine energy and transferring it to the normal ones enabling them accomplish their pious objectives : the grant of ‘abhaya’ and ‘varad’. The analogy has further breadth. The lotus held in them comprises five elements : earth, water, fire, air and space, which are also the elements of cosmos. Thus the lotus is the microcosm of cosmos. The symbolism goes further. In upholding lotuses Lakshmi is upholding and sustaining the cosmos, the essence of her being. Apart, seated on lotus she has been represented as pervading the cosmos, and with lotus motifs on palm as herself being the cosmos.

The statue is endowed with rare aesthetic quality : perfect anatomical proportions and great craftsmanship. The round face with sharp features : wide open neatly conceived eyes, heavy eyelids with arched eye-brows, sharp nose and cute lips and the well aligned chin, the upwards narrowing neck like the neck of a pot, cheeks glowing with gold’s brilliance and sublimity enshrining her face, all combine to make the image absolute. The figure’s anatomy : a bit sensuously modeled breasts symbolic of universal motherhood and her divine will to feed and sustain, subdued belly, voluminous hips and moderate height, is highly balanced. The goddess is wearing a towering crown and normal ornaments. However, the most fascinating component of her ensemble is her ‘antariya’ – lower wear, with its frontal decorative bands. 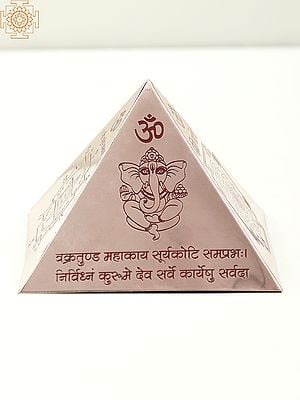 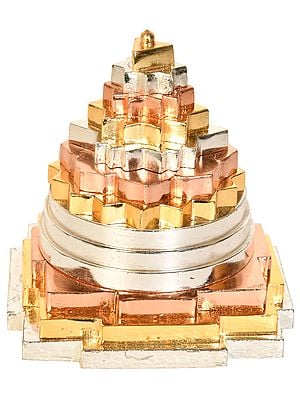 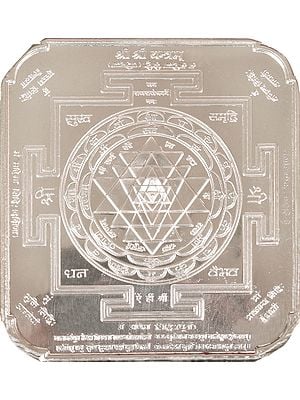 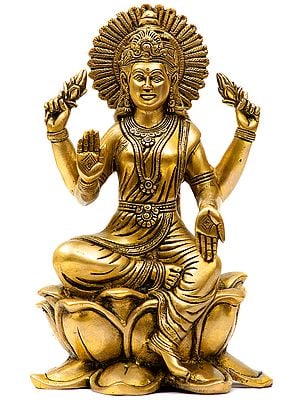 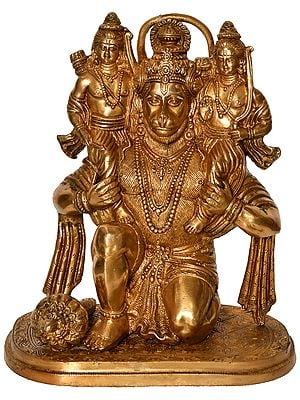 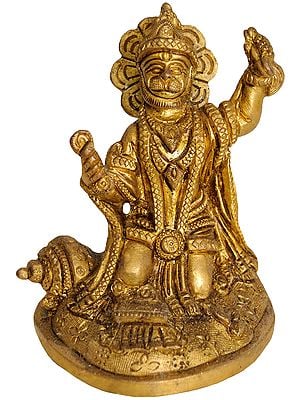 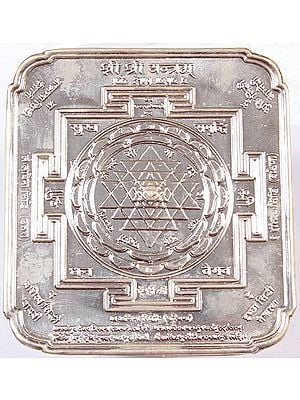 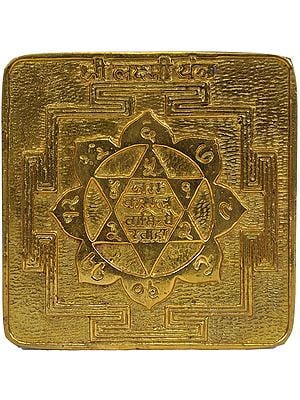 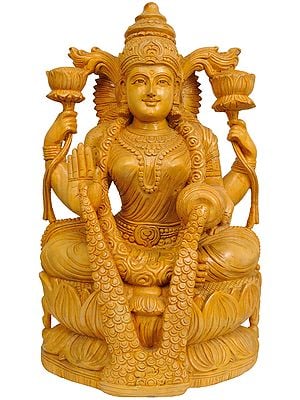 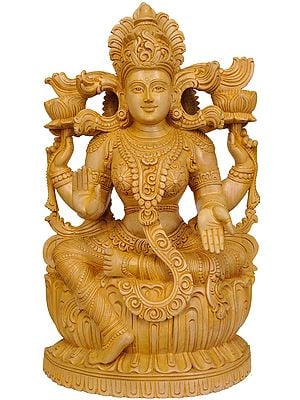 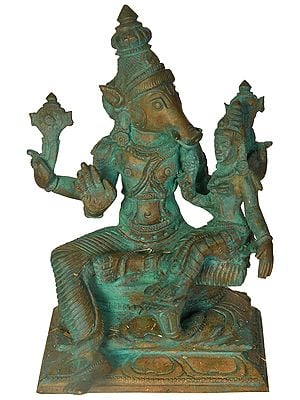 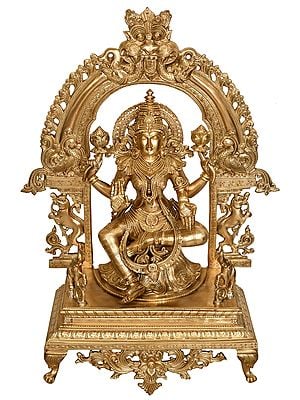 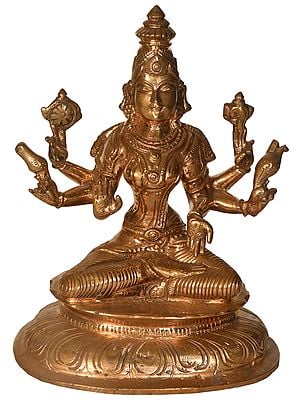 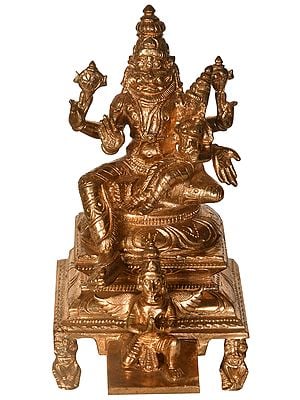 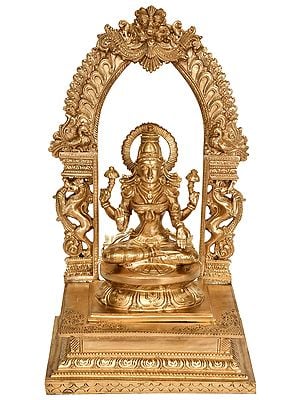