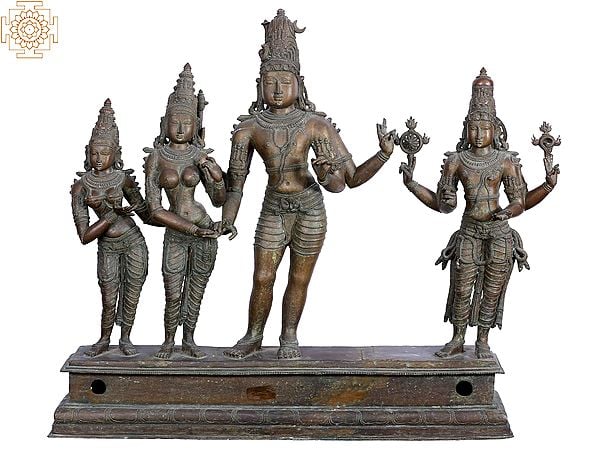 The marriage of Shiva-Parvati is a celebrated occasion in Hindu tradition. It is one of the rare episodes from the Lilas (divine plays) of Adi-Shakti and Adi-Deva, the primordial god and goddess, that puts them in a human scenario, where they become the ideal expression of the joy of the devotee. The relatability and simplistic beauty of this celestial union have inspired the Tamil Sthapatis to create the group of bronzes known as “Kalyana Sundaram”.

On a shared pedestal here stand Shiva, on whose left is a four-armed Vishnu, acting as the officiating priest for the marriage. Shiva is also four-armed, adorned by the crescent moon on his jatamukut (crown of matted hair), Naga (snake) that coils around the crown, Rudraksha rosary accompanied by other fineries, and a short dhoti with the waistband embellished by the Kirtimukha (face of glory). Chandrashekhara (who has the moon or Chandra on his head) Shiva has taken the most exquisite male form, second to none in the entire creation in the charm that his presence exudes, a point which is highlighted by the maker of the bronze by giving him the central position and a higher stature than the other subjects of the image. His right hand is softly placed on the hand of his coy bride-to-be, Parvati, who is blooming with youth- her rounded breasts, thin waist, and graceful limbs instilling feelings of passion in the heart of the great ascetic. On her side is Lakshmi, Vishnu’s consort acting as the confidant of Parvati, she too dressed in heavenly attire. There seem to be an expression of amusement and happiness on her face, which is adorned by a playful smile. The sensitivity shown by the artist of this bronze composite towards this great occasion is displayed in the affinity shown shared between Parvati and Lakshmi. While Devi Parvati is entering a new phase of her life standing in such close proximity to the fruit of her austerities, Shiva, she seems to be overpowered by the shyness of a new bride. Empathizing with the state of her heart, goddess Lakshmi nudges her towards her beloved husband.

The detailing in the work of the maker of this bronze is best visible on the reverse of the image, in the distinct lines of the dhoti (lower body garment) of all the deities, hair that falls over their shoulder, and the musculature in Shiva’s legs. The holes in the platform indicate that it is a processional image, seated in which the gods take the center stage during the annual celebration of the marriage of Uma-Maheshwara. 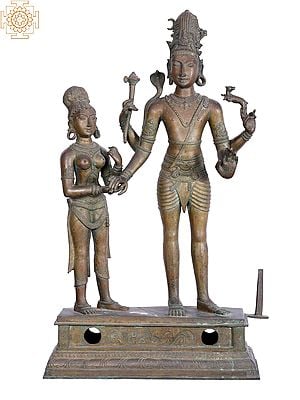 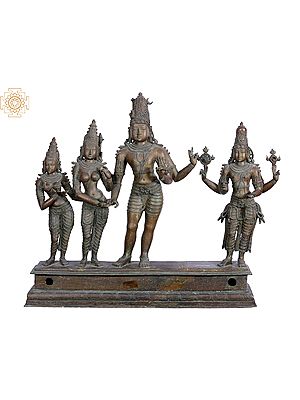