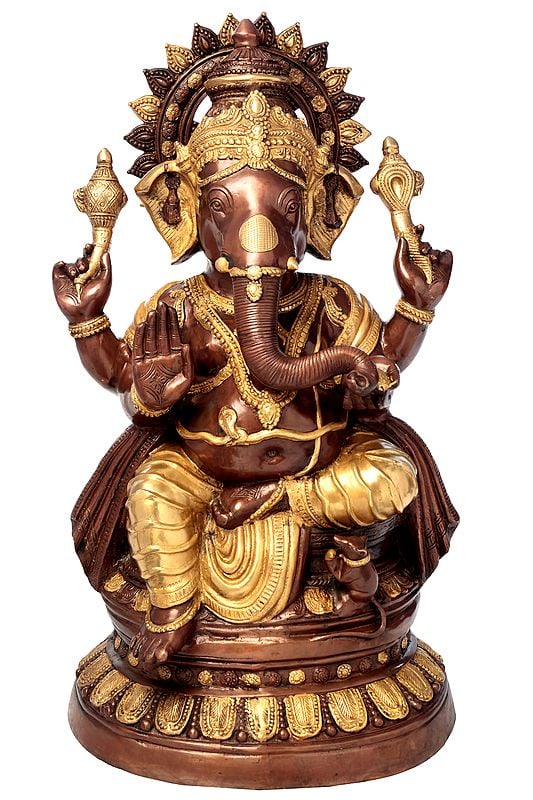 35" Large Size Ganesha, The Blissful God of Auspices In Brass | Handmade | Made In India

Aum ekadantaya vidmahe, vakratundaya dhimahe, tanno dantih prachodayat that is, We devote our thought to the one-tusked Lord. We meditate upon Him who has a curved trunk. May the tusked One guide us on the right path. This is precisely for what we worship Lord Ganesh. The single tusked, or the one tusk broken form of Ganesh suggests that for accomplishing his devotee's prayer he would not hesitate in sacrificing even one of his body parts. Aum ekadantaya namah is the mantra that ends the duality, leads to one-pointed mind and singleness of object. The Elephant headed Ganesh with his long curved trunk has power to reach the far off regions, all directions, all cherished objects and all devotees.

In Aum vakratundaya hum the syllable hum is suggestive of the prayer that with his curved trunk the remover of evils Lord Ganesh straightens the paths of curve-minded people and curbs the atrocities of the cruel ones.

This benign blend of Ekadanta and Vakratunda manifestations of the auspicious Lord enshrines this three feet high lustrous bronze cast. This statue, carved in the finest and the most characteristic details, blends two of the most auspicious manifestations of the iconography of Lord Ganesh, namely, the Varada and the Sankatahara. The Varada Ganapati bestows upon the devotee all that is blissful in life as also after it and the Sankatahara Ganapati removes all obstacles from his path. The compassionate Ganesh is always a pleasant deity, as here in his Lalitasana posture, that is, a loving mode of being seated. Obviously, the Sankatahara Ganapati is not a destruction-loving god who eliminates or even penalizes the evil or the obstructing ones. He only arrests or holds them by his noose to let the good prevail and goads them to the right path. He, thus, blesses his devotees to accomplish their objects without being obstructed and at the same time leads the detriments to the right path. The Sankatahara Ganapati hence has a compassionate bearing and just four hands, in two of which he carries weapons but only a goad and a noose, that is, the instruments, the one of which holds an object in control and the other one leads it to the right path.

This marvelous piece, requiring exceptional skill in its casting, represents Lord Ganesh in Lalitasana, a mode of sitting which allures by itself. The image proper has been installed on a raised pedestal consisting of conventionalised lotus petals and beads. The right leg of the deity suspends to its mid-height. His vehicle mouse has stationed itself on the upper ridge of the pedestal. It is around here that the circular fold of the dhoti of Lord Ganesh and the ends of his sash beautifully lay. Cast in copper mixed alloy, the image naturally obtains the lustrous deep brown complexion against which the golden brilliance of garments and ornaments gets many more times multiplied. The raised ornaments have such appearance as if these are superimposed or are really worn and not carved with the figure. Figure's eyes give a feeling of deep thoughtfulness and the face has a benign bearing. The well shaped ears are further beautified by additional ornaments and so are the other parts of the auspicious god. Besides the nagabandha he is also wearing yajnopavita. 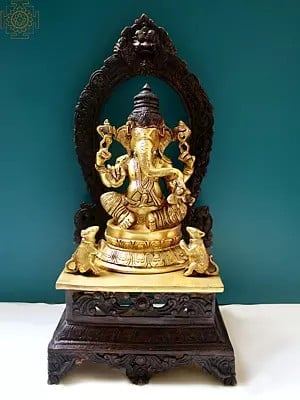 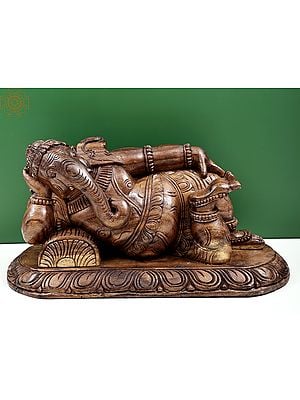 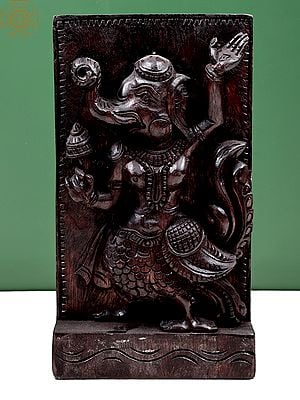 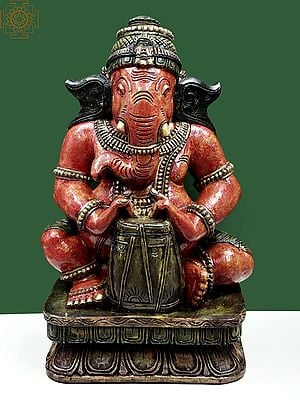 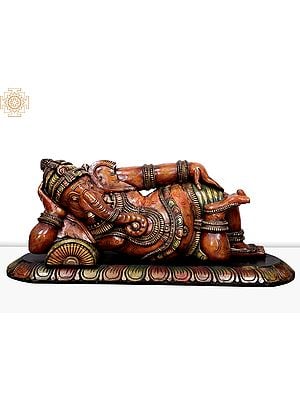 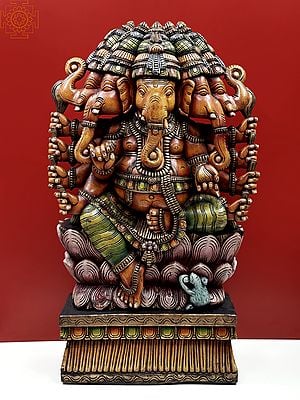