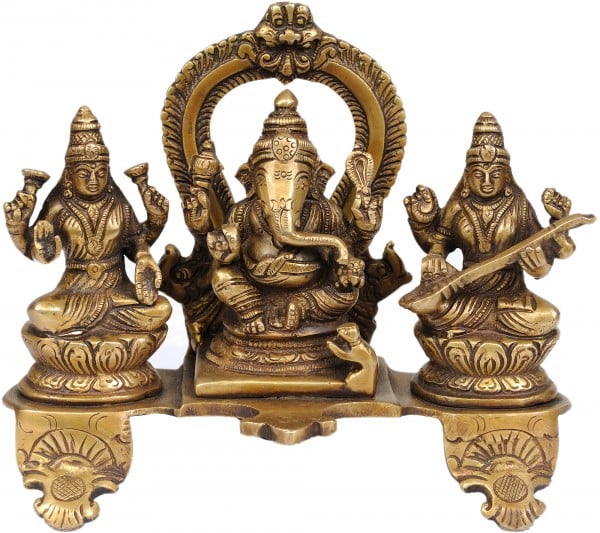 5" Ganesha-Lakshmi-Sarasvati, Triad Of Prosperity In Brass | Handmade | Made In India

The Lakshmi-Ganesha-Sarasvati triad of the Hindu pantheon stands for prosperity and well-being. Devi Lakshmi is the presiding deity over wealth and resources, Lord Ganesha over all beginnings and endeavours, and Devi Sarasvati over learning and the fine arts. In many parts of the subcontinent these three deities are considered siblings and the children of Devi Durga. The composite murti that you see on this page depicts the Lord Ganesha flanked by His beauteous sisters, each of whom are sitting upon thrones of gigantic lotus blooms, each of them chaturbhujadhari (possessed of four arms).

The iconographies of each of the deities are replete with unmistakable details. The twin lotuses in the posterior hands of Devi Lakshmi, the chubby belly of Lord Ganesha scarcely held in place by the naga (snake), and the long slender-necked veena in the gracious hands of Devi Sarasvati. The Devis are seated in ardha-padmasanas, while their brother is seated in His usual childlike stance. A sharply curving aureole frames the central Ganesha figure, at the zenith of which is the all-encompassing Kirtimukham motif.