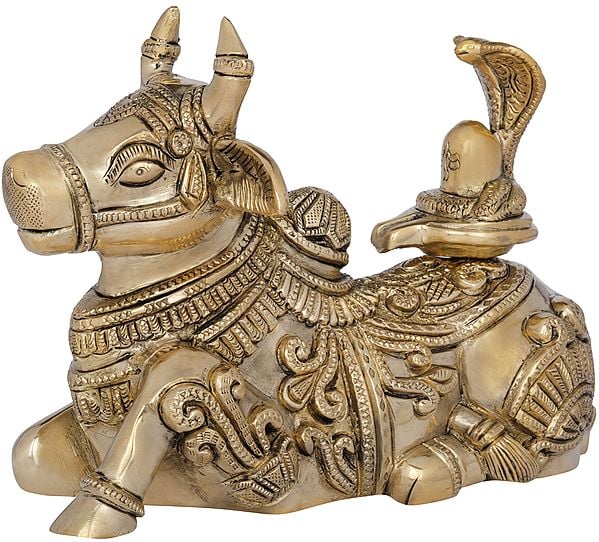 During the churning of the oceans, when halahala (a deadly poison) emerged, lord Shiva undertook the task of drinking it in order to protect all life on earth. while he was doing so, a few drops spilled. Seeing this, Nandi, Shiva’s vahana (vehicle) followed in his lord’s footsteps and drank those drops. Devotion, self-sacrifice and bravery is what Nandi stands for. His loyalty rests with Shiva and just like him, Nandi is always ready to help those who call on him.

This brass Nandi with Shiva linga perfectly embodies the bond between the two. It is a rare idol, since in most of the images Shiva is shown in anthropomorphic form while here, he is shown as a linga, flanked by a naga. Nandi is sitting comfortably, one leg tucked under his body while the other is raised. From his horns to his legs, his entire body is jeweled. His round hump is decorated by the artist with a floral motif. The entire image shows immense attention to detail- the hoof in the front is designed smoothly and the tail of Nandi can be seen sandwiched between his body and hind legs. Made in brass, this image of Nandi appears quite naturalistic thanks to its minute all-around carvings.