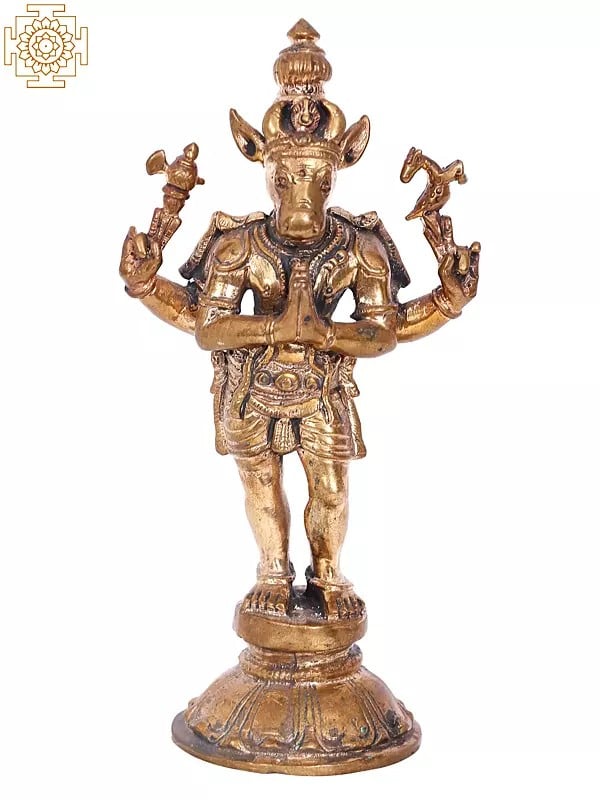 $160
Quantity
Notify me when this item is available

This gracefully lean and muscled ‘panchaloha’ sculpture is of the zoo-anthropomorphic form of Nandi, or Nandikeshwara. Nandideva’s roles are not confined to being the ‘vahana’ or mount of Shiva; on the contrary, he is the guardian deity of Mount Kailash (which is why today every Shaivite temple has a stone statue of a seated Nandi facing the main shrine) and, as part of the Shaiva Siddhanta tradition, is the principal guru of the eight disciples of Nandinatha Sampradaya, a sect which greatly emphasises the tradition of yoga.

Happiness, joy, and satisfaction define the qualities of Shiva’s mount, and as the divine guardian, Nandikeshwara is presented in a four-armed form: his front two hands are clasped in a namaskarama, perform the ‘anjali mudra,’ while the other two hold the ‘parashu’ or battle axe – symbolising Shiva’s own axe ‘Vidyudabhi’ that he presented to Parashurama – and a ‘mriga,’ symbolising lordship over the animal kingdom.

The auspicious image of Nandi is such that it has been embraced all over the world, especially amongst most of the Tamil Shaivites, who take pride in the ‘Nandi Flag.’ Nandi, in fact, was also the royal symbol for the Pallava dynasty and the Jaffna Kingdom of Sri Lanka, and in Vietnamese Hinduism, it is believed that upon death Nandi shall ferry their souls to the holy land. Such beautifully deep mythic ideas make acquiring this bronze work even more breath-taking. 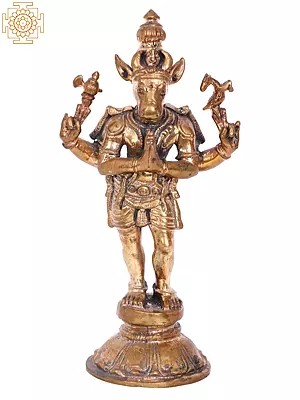