This 54 inch tall brass statue, an artefact of auspicious nature, which can beautify a large drawing hall by its unique craftsmanship and sanctify a house by its auspices, is a representation of the auspicious Deepalakshmi. Different from what its name suggests, Deepalakshmi is not a deity, or an aspect or manifestation of the Goddess Lakshmi.

Quantity
Usually ships in 10 days
Notify me when this item is available
It is a votive image in a restricted sense, that is, not for an altar but only to be worshipped during Diwali puja along with Diwali's presiding deity Lakshmi. Though comparatively a recent innovation, Deepalakshmi is the product of India's long sustained tradition of thought, which has always worshipped woman and has always celebrated the birth of light. This tradition synthesises, in the auspicious form of Deepalakshmi, its reverence for woman and its exuberance for light and links it with Diwali, its festival of light and Lakshmi cult. Thus, the Deepalakshmi statues, the harbingers of light and auspices, combine in their form the womanhood and light, one in the form of a woman with divine appearance and the other by making her carry a deepa, or lamp in her hands.

Deepalakshmi does not have a legendary past, or an ancient tradition of art, literature or faith. It came in prevalence around the later half of the 16th century only. Diwali was one of India's main festivals and people celebrated it in full exuberance. Not only that they illuminated their houses with lights but also gifted and exchanged lighted lamps with friends, relatives and others in contact. This formed a significant part of the Diwali celebration. To reap profits, the craftsmen of Vijayanagara and Madurai, known for their independent art styles, namely, the Vijayanagara and Nayak, developed some artistic varieties of lamps for gift and exchange. They cast in metal and clay statues of damsels with celestial look holding the auspicious Diwali lamps in their hands. Initially, such female figures had normal two arms but later they began having more than two also to carry in them more lamps. Out of reverence people equated a woman with goddess Lakshmi. This deity like multi-armed appearance cast in these statues further strengthened this practice and gave to the rendered figure Lakshmi as its name. With deepa in hand, the cast figure came to be known as Deepalakshmi.

The tradition of embellishing a Deepalakshmi statue with finest ornamentation and minutest of details goes back to its initial days. In casting their statues, both the Vijayanagara and Nayak art styles laid great emphasis on rendering minute details, sharp features, tall figures, a blissful composure and demeanour on faces, well moulded and proportionate figures adorned with elegant jewelry and gems and on the beauty of eyes, neck, belly and breasts. Deepalakshmi statues were cast without crown and halos but their hair were so styled that they assumed the look of a crown. The figures were rendered semi-nude with upper part either fully exposed or covered partially with ornaments. It was only in the costume part that the two art traditions, the Vijayanagara and Nayak, deviated from each other. In Nayak tradition, the costume went up to figure's breasts, while in Vijayanagara it confined only up to waist.

This excellent Deepalakshmi statue is obviously a great manifestation of the legendary Vijayanagara art style. Besides what it traditionally prescribed, figure's face brims with emotion. Her features, style of dressing, its artistic folds, body build with moderate height, and ornaments are typically Andhrite. Her hair beautifully float on her shoulders and a gentle smile on her lips. The highly auspicious Kirtimukha motif adorns not only her both arms but also lay like a buckle upon her waist along her girdle. The sash suspending along her waist on both sides balances the width of the statue. 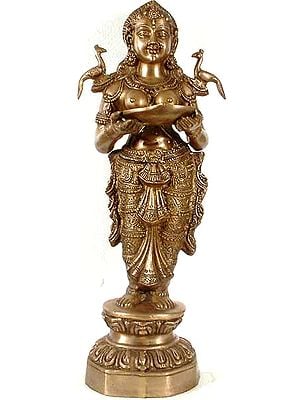 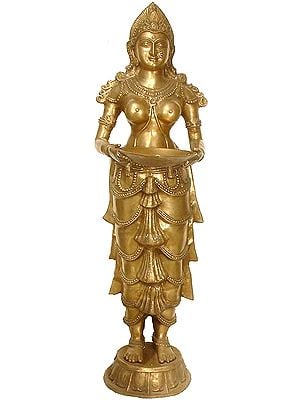