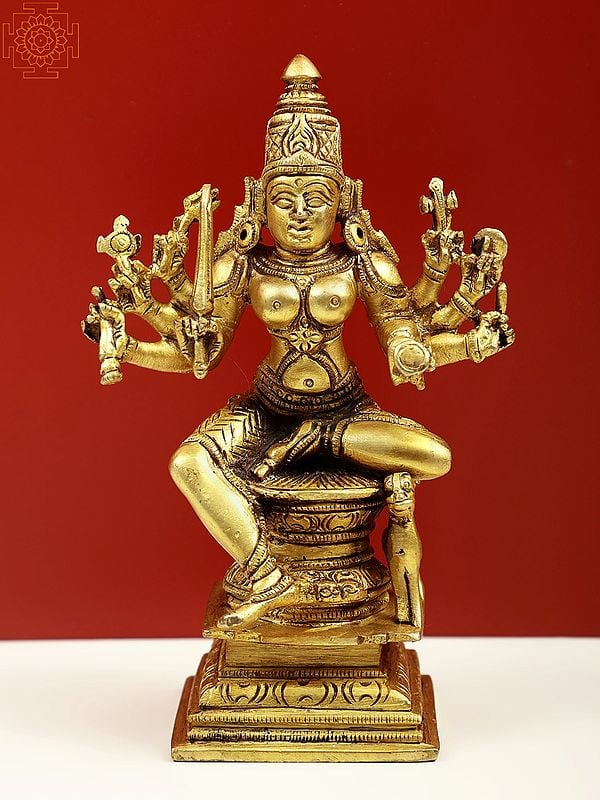 Worship of the feminine force of nature has been a long drawn tradition in Hinduism. Every sect of Hindu people worships at least one feminine deity with all their love and devotion. Often these are the same deities with just different names. Devi Mariamman is a goddess primarily worshipped in southern India. She is often equated with the north Indian goddesses such as Durga and Parvati. It is believed that the worship of Devi Mariamman dates back to the pre-Vedic period. She is mostly revered by the village people who seek her blessings for their protection and fertility. In Tamil, 'Mari' means water and 'Amman' means mother. She is the mother of rain, hence the presiding deity of prosperity and wellbeing. She is also worshipped for the cure of heat-based diseases such as chickenpox and rashes.

This brass statue beautifully portrays the guardian aspect of the deity showing her in full vigour yet enchanting calm. Drawn along with the south Indian spirit, the craftsmanship of the statue brings out the beauty and brilliance of ancient art. The ten handed Devi is sitting with her left leg folded while her right leg is loosely held in the air. She is holding various weapons and a skull in her hand further solidifying her image as a protector deity. Dressed in bare clothes, the Devi also sports minimal jewellery. The most striking feature of the statue is the vibrant face of the Devi. Instead of all the turmoil, the face appears absolutely serene, devoid of any ripples, immersed in something beyond the realm of time. Devi Mariamman is not just another goddess in the long list of Indian deities. She is the very heart and soul of her ardent devotees. Along with being a manifestation of the essence of Devi, this statue is also an exemplary work of art, a kind every artist aspires to express