Kali stands here in a graceful and majestic posture of triumph. A closer inspection however reveals that her right leg curves and rests upon the knee of her husband Shiva, who is recognizable by the twin-sided drum he plays with his left hand and the hooded snake he rests upon. Her left leg is placed upon his chest.

Kali sways to the primordial rhythms of Shiva's drum. Hindu philosophy states that at the beginning of creation there existed only sound. From this sound was created the material cosmos. Some people believe this to be the aspect known to science as 'Chaos.' Kali then thus represents the archetypal state of chaos that existed before creation. But this was not a state of disarray. Creation cannot result from confusion. It had a certain rhythm. It is this rhythm that Shiva generates from his drum popularly known as the damaru. All manifested dynamic existence dances to this tune. This is Kali's symbolism and her message, which we gain by meditating on her.

Kali in the Cremation Grounds (Miniature Painting On Paper)

A Prayer and Accompaniment to the Worship of Kali (Tantra Painting) 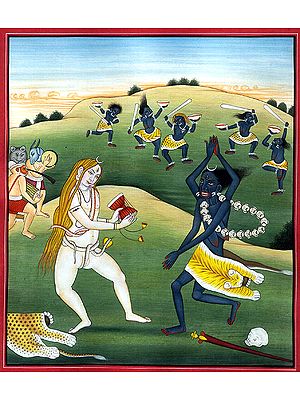 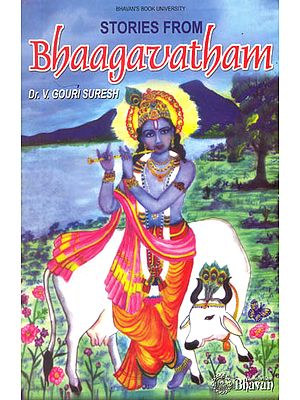 Stories From Bhaagavatham
By Dr. V. Gouri Suresh
$24.50
Out of Stock
Add a review
Have A Question