All is Nothing But Shiva and Parvati (Ardhanarishvara) 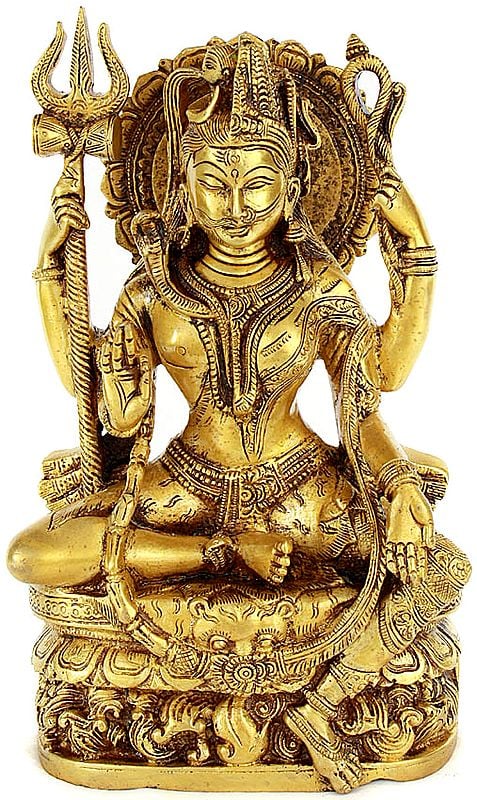 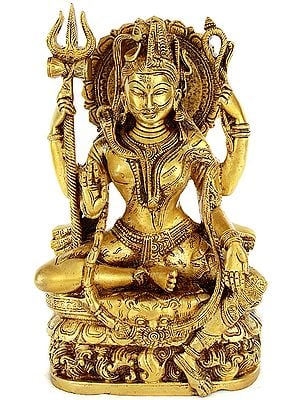 Ardhanarishvara is a composite androgynous form of Shiva and his consort Parvati. This fusion represents a symbolic unity of nature and knowledge where right half is the male Shiva and left as Parvati. The perfect synthesis of masculine and feminine energies of cosmos represents how Shakti is inseparable from Shiva. The statue shown here is carved out of a fine quality brass in the most realistic shape and curves. The deity sits in lalitasana on a multi-layered lotus pedestal chiselled stylishly and is covered with a sheet of tiger skin.

Shiva wears a short tiger skin dhoti and Parvati is garbed in a beautiful sari carved in layered patches and a smooth flow. The sculptor has beautifully differentiated the male and female personalities even in their complete union. Shiva is adorned gracefully in Rudrakshmala and a serpent coiled around his neck along with a long garland of flowers and Parvati wears layers of jewels that beautify her neck and an extremely long necklace that touches the pedestal; matted hair is adorned with a half-moon and Ganga on Shiva’s side and a long crown on Parvati’s side and a cosmic lotus aureole is formed behind.

Left side hands (Parvati’s side) hold a lotus and a graceful mudra respectively while the right side hands (Shiva’s side) are held in Vitarka and carry trident with a damru tied to it. Have a keen look at the captivating look of the eyes, sweet smile of calmness and a differentiating feature of bindi on left side of forehead and third eye and a Shaivite tilak on right. This half woman lord is the cosmic being that exists beyond all polarity and duality, situated above all complementary aspects that exist in manifestation. The beauty of this sculpture is highlighted by its smooth and glossy texture and an antique look.