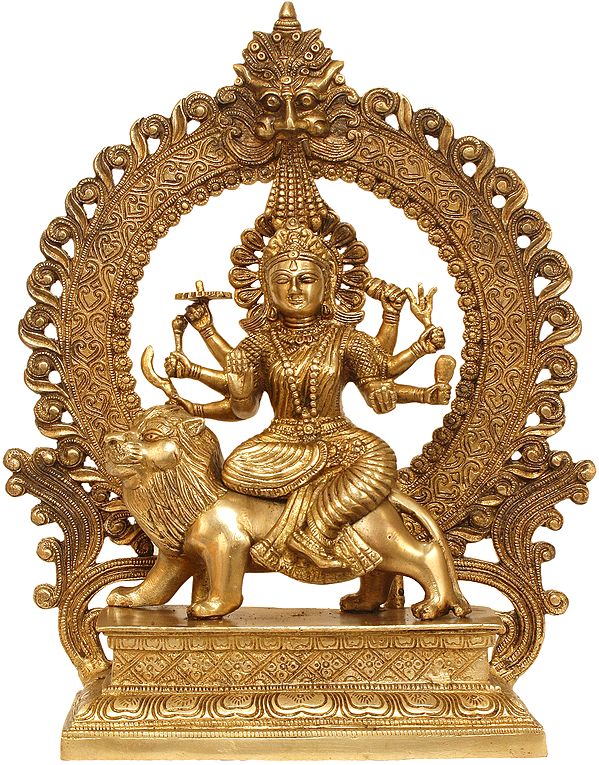 $325.00
Usually ships in 10 days
Notify me when this item is available
Save to Wishlist Send as E-card Share by Email
A magnificent piece of art outstanding in discovering details, even the minutest, of wears, artistically surging sari, precisely discovered each fold cast with magical symmetry, patterning and the texture of weaves revealing in sari’s border and blouse, of jewellery, especially the ‘Champakali har’ – necklace consisting of Champa flower-like designed ‘phalis’ – pendants it consists of, tresses, the mount’s mane, and those of design-patterns the ‘prabhavali’ has been conceived with, especially the inner ring consisting of Maulashri flowers – each tiny petal distinctly carved, and various other parts to include the precisely conceived attributes she is carrying in her hands, this statue represents the eight-armed goddess Durga riding her mount lion. This manifestation of the goddess is classed in the tradition as ‘Ashta-bhuja-dhari Simha-Vahini Durga’.

The eight-armed goddess has been represented in the statue as holding her normal right hand in ‘abhaya’ – granting freedom from fear : a gesture assuring protection. In other three hands on the right side she is carrying ‘chakra’ – disc, and mace, both Lord Vishnu’s attributes, and suckle, her own, and on the left, club, trident, lotus and pot, the last three the attributes of Lord Shiva, goddess Lakshmi and goddess Annapurna or Bhudevi, the later additions to Hindu pantheon, not Bhudevi but Annapurna being in live worship in South on good scale. The suckle, her own attribute, the tool of harvesting is linked with fertility, food and hence sustenance, and the pot, carried in her normal left hand, composed of the elements of the earth – the clay, ocean – the water it is made of and contains, and the sky – the space it has within, represents the cosmos – the life and entire creation, the goddess has been represented thus as the upholder of the cosmos and sustainer of life.

Strange it might sound, unlike any of her forms engaged in one exploit or other, or manifesting this aspect of her being or that : each one just a transitory act, this statue represents the demon-slaying goddess in her ultimate form – her timeless presence that guides and commands all acts and assures protection and fulfillment of the desired merely by being there. Not in any kind of readiness to rush or alertness in mind, with absolute ease in her poise and contentment on face, the goddess is seated in ‘lalitasana’ – posture revealing beauty of form and effortless naturalness with the left leg suspending down, and the right, horizontally laid leftwards as when engaged in meditation or yoga. Essentially a votive icon, the lion-mounted image of the goddess has been conceived as installed inside a circular ‘prabhavali’ – fire-arch, rising over a four-tiered rectangular ‘pitha’ – pedestal, the base consisting of a plain moulding, over it, a tapering one, adorned with conventionalised lotus patterns, the third, conceived with flower motifs contained in squares, and that on the top, with conventionalised lotus forms and plain top. The ‘prabhavali’ is a three ring formation with an auspicious Kirtimukha motif atop.

The image of the goddess that the statue represents has well defined anatomy and facial features, a rounded face, sharp nose, thoughtful eyes, well fed cheeks and a broad forehead partially covered by her crown. A bit heavy ‘dvi-bali’ – two fold form, defines the beauty of her neck. Unlike the images of goddess Lakshmi who as a rule is conceived with youthful vigour and sensuous modeling goddess Durga seems to have been represented in maturer years befitting a mother. Revealing rare grace and sublimity her figure has been modeled on divine lines. The divine aura reflecting in her effulgent form apart, the icon of the goddess has been adorned with routine ornaments : a couple of necklaces on her neck, a girdle with a floral buckle on the waist, set of routine bangles on arms, and foot-ornaments. She is putting on a moderate crown with a halo-like circular disc consisting of lotus-motif ‘phalis’ appended to it. Her ensemble includes a silk sari with gold brocaded border and an elaborately worked blouse. Tresses of her hair lay curved on her shoulders.