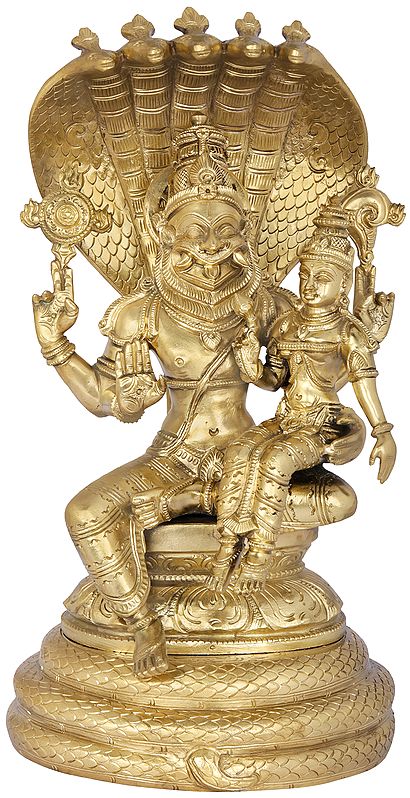 $595.00
Of the nine avataras (incarnations) of Lord Vishnu, the Narasimha roopa is the most fascinating. The name Narasimha is a portmanteau of the Sanskrt words nara, which means man, and simha, which means lion; but Lord Narasimha is neither human nor beast. Although He has the torso of a lion and the limbs and lower body of a man, the fact of it could be deduced from the boon of King Hiranyakashipu whom He killed, which states that he can be killed by neither man nor beast.

The handpicked bronze sculpture that you see on this page depicts the Vishnu-avatara Lord Narasimha seated in lalitasana. On His lap is the petite and gentle Devi Lakshmi, His wife. Note the striking contrast between the fierce demeanour of Lord Narasimha and the graceful composure of Devi Lakshmi. There is meaning in that - myth has it that the ardour of Narasimha was cooled only in the proximity of Devi Lakshmi. Their union is indicative of divine harmony. She is the presiding deity over wealth and resources, things which are indispensable to the process of preservation, over which Lord Vishnu is the presiding deity