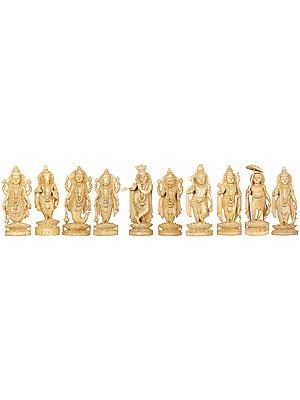 Sculpted in one of the most popularly demanded South Indian wood known for its smooth texture, delicacy, resistant to harsh outdoor climate and light glossy look; its appearance and intricacy enhances the carvings of sculptures and other decorative articles. The one shown here is a combined pack of all the ten incarnations of Lord Vishnu, carved on realistic double lotus pedestals of varying heights.

Lord Vishnu is worshipped as a preserver god who protects universe from being destroyed and is opined to possess unimaginable powers to manipulate energies on cosmic scales for the well-being of mankind. The Dashavataras shown on this page are said to have incarnated in different yugas (era) with the sole purpose of eradicating evil and revive dharma.

Starting from the left, the various Vishnu descendants are as follows: Kurma- a mixed form of human and tortoise, Hayagriva- one with a man’s body and head of a horse, Matsya- first avatara with the torso of a human connected to rear half of a fish, Varaha- a human with the head of a boar, Krishna- the cowherd who destroyed the demon Kansa, Narasimha- a human with the head and claws of a lion who defeated Hiranyakashyap, Parshuram- Vishnu’s warrior avatara, Rama- an ideal and a perfect man who killed Ravana, Vamana- the dwarf Brahman who cursed Bali for taking over Indra’s position and Kali- he is yet to appear at the end of Kali Yuga (current era), riding a horse.

All the avataras are graciously garbed and ornamented in the best forms carrying their respective implements, along with the marvellous crowns that glorifies their head.