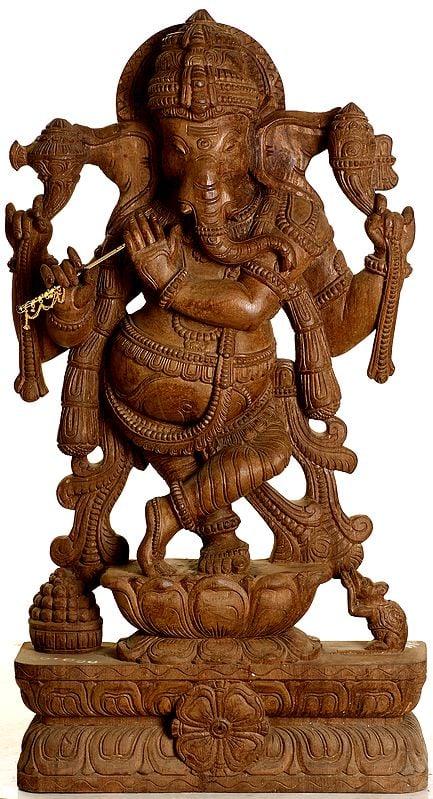 FREE Delivery
$1064
This item can be backordered
Time required to recreate this artwork
20 to 24 weeks
Advance to be paid now
$212.80 (20%)
Balance to be paid once product is ready
$851.20
Notify me when this item is available
This rare masterpiece discovering all its magic and visual effects in the wood’s natural colour, as if a log of teak or Bangai – the finest timbers it seems to have been carved out of, has given forth a form, the same as a twig gives forth a leaf, darker and lighter spots and all variations in the wood’s texture retained, represents enrapt Ganesha playing on his flute, and in the process his figure has twisted corresponding to the rise and fall of the pitch and to the emotional bearing that the melody emitting from the flute creates. Fully absorbed Lord Ganesha is blowing his flute. The melody that his own fingers moving on his own flute produce has completely overwhelmed him and this the gait of his feet and the demeanour of his face powerfully reflect. More than any other dimension of the statue, a strong geometric perception framing the figure of Ganesha attributes to the artifact its power to delight. The figural geometry, the symmetry that goad and noose holding hands when joining the ears, or that which the waist-band’s unfurling side-loops joining on the left with the figure of his mount mouse, and on his right, with the basket of ‘laddus’, create, is one of the major attributes of the artifact’s overall aesthetic beauty.

Manifestly Lord Ganesha has been represented as standing in ‘tri-bhang’ – three-curved, posture, a form, especially when playing on flute, more often associated with Krishna’s images; however, dance that reveals in his figure, seems to have rendered the ‘tri-bhang’ posture irrelevant. In the statue dance seems to have overpowered the all-conquering Ganesha and the delight that he is seeking in such subordination appears to be the essence of his being. It is not in ‘mudrayen’ – gestures of hands, strutting feet, tilted face – in whatever degree, or in the figure’s curves, but in its overall emotional bearing and complete absorption reflecting on the deity’s face that the dance discovers in the image its form. Music and dance are the essence of Lord Ganesha’s being; however, he danced only to delight, never to destroy. Not rumpus or rowdy, and sensuous never, even in great ecstasy and exuberance elegance, grace and divine composure are the essence of his dance. Though the figure in the statue has been represented with slightly right-inclined head, a little raised legs as mincing in dance, minor body curves, especially the hips with pot-belly tilted to right, and overall bearing of the face – some of the attributes of dance, it is in the divine sublimity enshrining the figure of the loving god that the dance discovers its essence.

Nratya or dancing Ganesha is one of the thirty-two classical forms of Lord Ganesha’s image enshrining early Puranas. Though basically a form as in his classical iconographic traditions, this image does not adhere fully to his Nratya Ganesha form. The four-armed Nratya-Ganesha is said to perform his dance under the Kalpa-taru – wish-fulfilling tree, symbolising life and joy. The statue does not include a tree form; however its essence is obviously lively activity and delight, and to such extent it pursues classical norms of Nratya Ganesha. His queer pot-belly collected and twisted to right, his left shoulder, diagonally moved to further left, and fluidity that defines the entire figure create rare rhythmic dimensions : the essential features of dance.

The image of the elephant god stands a multi-petalled full blown lotus consecrated on a base consisting of a pair of conventional lotus mouldings with a four-petalled flower in the centre interlocking them. On its right lay a basket of laddus, and on its left is parked his vehicle mouse. In his upper two hands Lord Ganesha is carrying a goad and battle-axe and in the lower ones, a flute, perhaps the music that it is producing is aimed at substantiating the dance otherwise not so expressly represented. His figure has been conceived with a large belly, broken tusk, trunk, with its innovative form, first turned to usual left but, in the end, its tip to right, large ears, angular face, half-shut eyes and a forehead with ‘tri-punda’ mark. Lord Ganesha has been represented as wearing a broad crown-cum-helmet with moderate height, his usual ornaments, a sash-like worn thick flower-garland, an elaborate belly-band and decorative lace-ornament and an ‘antariya’ – lower wear.