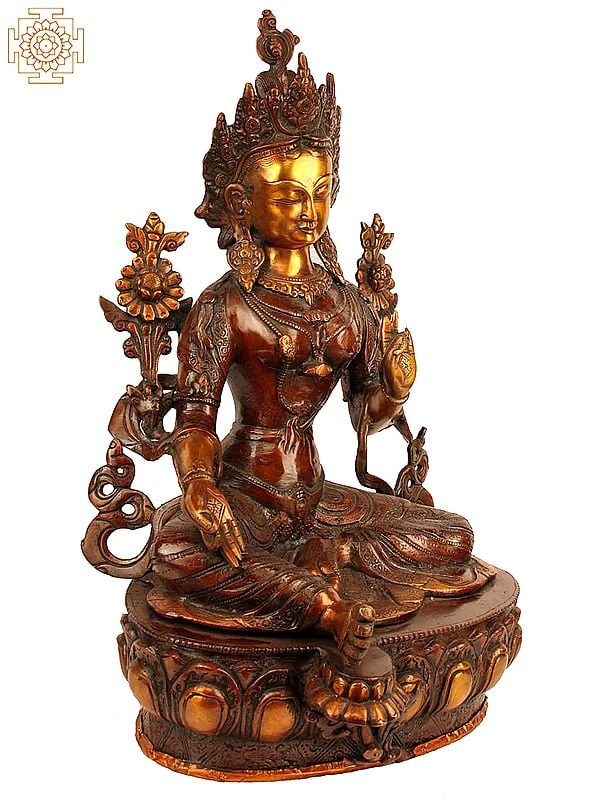 $395.00FREE Delivery
Usually ships in 10 days
Notify me when this item is available
This exceptionally beautiful brass-cast, plated with copper, revealing gold-like lustre and magnificence, represents the principal female Buddhist deity Tara with interknitted forefingers and thumbs holding in them the sacred threads with which she drags those who are caught in the tumultuous seas out of it for, as her name means, she is the goddess who helps wade across the impassable sea, symbolically also the sea of life. The image, rare in its aesthetic beauty, elegance, finish, sculptural quality and divine aura, has been rendered pursuing Tibetan-Nepalese idiom of iconography and metal casting. Tara has several manifestations, some being multi-armed, ferocious and as engaged in annihilation; this normal two-armed image of the goddess represents her, however, in her most benign, compassionate and sublime form revealing rare aesthetic beauty. The goddess has been cast as sprawling on a podium with lotus rising and a detached foot-raise also styled as a lotus. Such mode of seating is known in the tradition as ‘utkut akasana’. This abundance of lotuses in her iconography has other reason too. Tara, more so White Tara, Shakti of Avalokiteshvara : the lotus god in Buddhist tradition, also carries a lotus. Here in this statue her image is flanked by stylized lotus on either side.

A tenderly conceived figure with timeless youth, the goddess has been conceived with divine lustre and great quiescence on her face. Her figure has been adorned with brilliant jewels : beautiful ‘kundalas’ on her ears, variously designed neck and breast ornaments, belly-band and an elaborate crown with repeats of ‘tri-ratna’ motifs symbolic of three Buddhist cardinals : Buddha, Dhamma and Sangha. Her beautifully pleated ‘antariya’ – lower wear, spread over her legs and down on the seat, and her elegantly designed sash lying on her shoulders, arms and unfurling on either side are exceptionally beautiful. An angular face bowed a little with a broad forehead and pointed chin, hair with curling contours not fully cover by her crown and knotted coiffure in its centre, sharp straight nose aligning with elegantly moulded eyebrows, small cute lips, three-fourth closed lotus eyes, a well defined neck, broad shoulders, sensuously moulded well protruding voluptuous breasts, subdued belly and broader hips, a tall figure with tall arms, fine long fingers and tender feet, all reveal her sublime beauty and absolute womanhood.

The supreme female deity in the Buddhist line, more impressive and effective, Tara is often equated with Buddha in her compassionate nature and the power to redeem. Buddhist texts contend Tara to be the utmost powerful divinity, so much so that her ‘smile made the sun to shine’ and her frown, ‘darkness to envelop the terrestrial sphere’. As the perfection of wisdom and embodiment of the highest metaphysical principle Tara is Prajnaparmita and is considered as having priority over Buddha. She is revered as the light and the prime source of Buddhahood. In Mahayana Buddhism Tara’s significance is far greater. She is venerated as the mother of all Buddhas and Bodhisattvas. Similar to Brahmanical line where all deity-forms look like the forms of Devi, the primordial female power, all female deities in Buddhist line look like different forms of Tara that the Buddhist texts designate as the ‘Tara’s Bhedas’ – forms of Tara. Though more popular in Tibetan worship-cult, Tara is the universal deity of Buddhism. Texts perceive her as the most benevolent, compassionate, gentle, protective and playful deity full of youth and vigour.