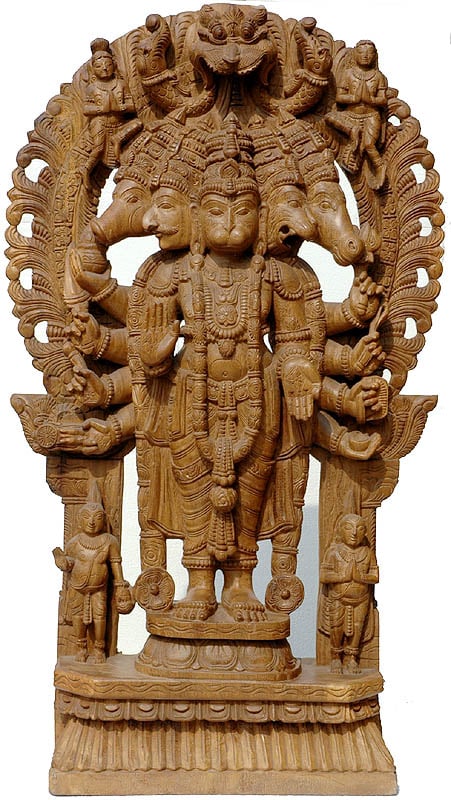 $1950.00
FREE Delivery
This item can be backordered
Time required to recreate this artwork
20 to 24 weeks
Advance to be paid now
$390.00 (20%)
Balance to be paid once product is ready
$1560.00
Notify me when this item is available
Post a Query
A brilliant example of South Indian iconographic model, the statue, carved from a piece of fine timber in the wood’s natural shade, represents monkey god Hanuman with five faces, the central one being his own, while the two on the right are those of Varaha and Garuda, and the two on the left, Narasimha and Hayagriva : all trans-human divinities in the Vaishnava line. Garuda, the mighty bird, is Lord Vishnu’s mount, while Hanuman, his devotee-servant in his incarnation as Rama. Varaha, the Great Boar, is the third of Vishnu’s ten incarnations, and Narsimha, half-man-half-lion, fourth. Hayagriva, the horse-faced form of Vishnu, is not counted in the list of his ten incarnations but a transformation for a specific purpose; however in popular tradition Hayagriva is often venerated on par with an incarnation of Vishnu.

As is the legend, a horse-headed demon, and hence named Hayagriva, born of Diti, the mother of demons and one of the wives of sage Kashyapa, Brahma’s grandson, once performed great penance and propitiated Brahma to grant him the boon of immortality and when Brahma expressed his inability to do so, he conceded that no one other than Hayagriva – one with the face of a horse, could kill him. Hayagriva believed that he would not kill himself and hence considered himself as one beyond death. This led the arrogant demons to inflict atrocities on all. Finally, Vishnu, with his face transformed as of a horse, took to the form of Hayagriva and killed Hayagriva, the demon.

Varaha and Narsimha were Vishnu’s incarnations for accomplishing other objectives. Vishnu is said to have incarnated as Varaha for killing the notorious demon Hiranyaksha and to restore the earth. Hiranyaksha, a mighty demon, once uprooted the earth from its place and dragging it to Patala-Loka – nether world, hid it there. Gods, saints, Brahmins and all prayed Vishnu for freeing the earth from the clutches of Hiranyaksha. Thereupon Vishnu incarnated as Boar, descended into deep waters and after killing Hiranyaksha carried the earth on his tusks and installed it back in its place. Vishnu had incarnated as Narasimha for killing the atrocious demon Hiranyakasipu who had from Brahma the boon that he would not be killed by either of the man or animal. The boon did not provide immunity against blend of two forms : Narasimha, who was neither man nor animal.

The statue represents Hanuman as the central figure of the image and other four faces as his aspects. All five faces are carried over a human torso suggesting the unity of cosmos which despite the outward diversities is just one. Having been in multitudinous divine roles and situations the tradition venerates Hanuman as the representative form of the entire trans-human or animal world. Emerging just for a specific objective Varaha, Garuda, Narasimha or Hayagriva, despite that two of them are Vishnu’s direct incarnations, do not stand on par with Hanuman. Hence, the represented figure has them as Hanuman’s iconic components. Corresponding to five faces the image has ten arms carrying in them various attributes : Purna-ghata, dagger, a medicinal plant, disc, trident, noose, hand-blow and a bowl. The normal two hands are held in ‘abhaya’ and ‘varada’.

Though the figure of Hanuman carries a trident, a Shaivite attribute, as also a ‘Purna-ghata’, a reminiscent of the Mother Goddess cult, his form has been conceived on strict Vaishnava lines. A towering Vaishnava crown, a Vaijayanti-like looking garland trailing down to ankles, his Vishnu’s figures’ like standing posture and many of Vishnu’s attributes, ‘Chakra’ in particular, all endow to the image Vaishnava character. The image has been installed in a ‘Prabhavali’ conceived on strict South Indian lines : the lower half being an architectural unit and the upper, a three-fourth circle comprising lotus design with an elaborate Kirtti-mukha motif. A pair of fish forms, considered as much auspicious, flank the Kirtti-mukha motif. The statue has two female devotees around the Prabhavali’s top and two ascetics around the Prabhavali’s base.