The Glory Of Lord Ganesha, Wall-Hanging Mask - Made in Nepal 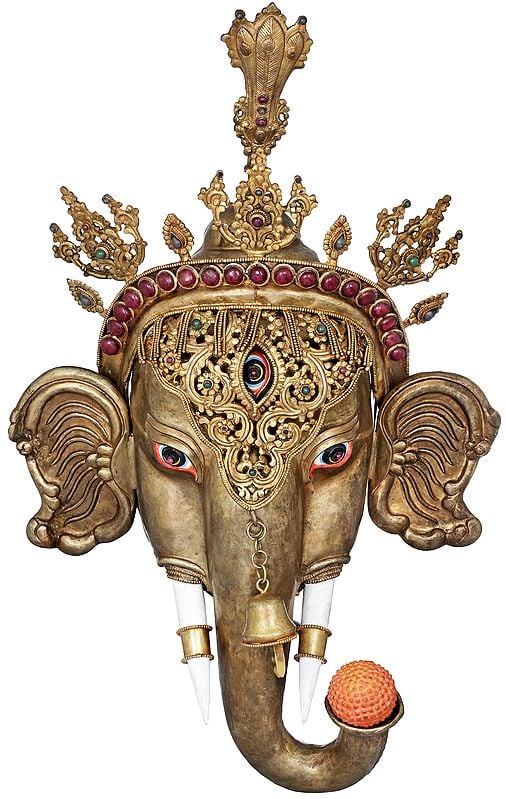 Ganesha, the god of beginnings is honored at the start of rites and ceremonies. He Is the remover of obstacles and symbolizes wisdom, truth and intellect. This precious 24 karat gold gilded wall hanging of Trinetra Ganesha is very precisely and delicately formed, keeping all the identifiable features underlined. The deep encarved eyes represent the importance of focusing on the target works and the third eye on forehead indicates his supreme knowledge and understanding. Big, flower patterned ears show his ability to hear all and grasp all; trunk folded from below holds a laddoo and the two decorated tusks exemplify the two aspects of human quality, wisdom and emotion. Wide open mouth demonstrates the natural human desire to enjoy life in the world.

Ganesha wears a supremely embellished crown with red colored beads forming a border and three flashy Trishul like representations above it. The triangular design of the crown covers the forehead giving an enthralling look and has a long bell attached to it hanging parallel to the trunk. The long top at the back of the crown is like a pretty flower having three long petals, about to bloom. The crown is the most attractive feature of the sculpture.

This sculpture has its own aesthetic appearance. Ganesha, with his presence in the house or office creates an aura of divineness, trust and purity.

The art of Nepal has a special place for copper. Amidst the variety of media on which Nepalese sculptural tradition stands, gilded copper is hands-down the most sumptuous. This Lord Ganesha wall-hanging mask is a fine example of the region’s copper-work. As is the preference of the region’s simple-hearted artisans, the subject matter is spiritual and popular. The elephant-headed child of Shiva-Parvati, the laddoo-loving boy-deity, is one of the most adored devas in the Hindu pantheon.

Lord Ganesha is depicted in all His heavenly regalia. A band of rich red rubies holding the five-spired crown in place, which in turn is studded with more jewels. The same is a typical feature of Nepalese iconography. An intricately sculpted layer of shringar graces His brow, through which could be seen the third of His eyes. In His deep, gorgeously coloured eyes, lies the fountainhead of Hindu visualisation tradition.

A tiny bell dangles against His trunk. At its tip He holds the customary modaka in all its fresh, saffron glory. The image of the juicy round sweetmeat contrasts with the slender, pointed, pristine tusks of the Lord, which are adorned with gold. His perfectly symmetrical ears have a realistic silhouette. Its insides are embossed with a series of lines, which add balance to the primarily vertical composition.