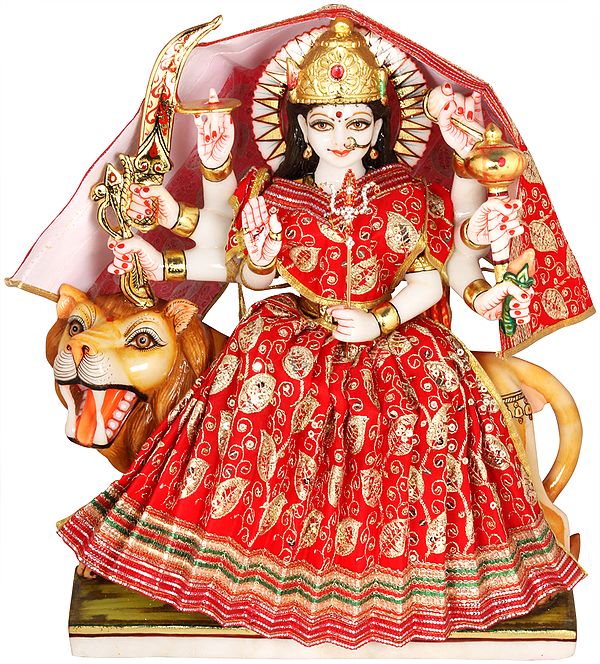 Mother Goddess Durga is a supreme symbol of women power or nari shakti marking her existence to destroy the evil and protect universe. She is a warrior for all ages, also recognized as Mahishasura Mardini as she was the only one amongst all gods to defeat the demon king Mahishasura and bring his reign of terror to an end.

This mesmerizing sculpture of the goddess, garbed in red lehenga-choli with zari motifs and thick piping border represents her this form as being worshipped during the nine days Navratri festival in Hinduism. Depicted in her ever-so-famous eight limbs, carrying essential weapons such as trident, bow and arrow, sword, chakra, conch (shankha), gada and lotus flower; sits on the outrageous lion (her vehicle) gifted by the god of mighty mountains, in her abhaya mudra.

The crowned head is the eradicator of woes and miseries, therefore also known as Durgatinashini, is adorned in ravishing jewels and a sun shaped halo that spreads its rays of positivity and good fortune. One more worthy aspect in this sculpture is that it is carved out of a single piece of marble and this pair of clothes is complimentary along with the divine sculpture.