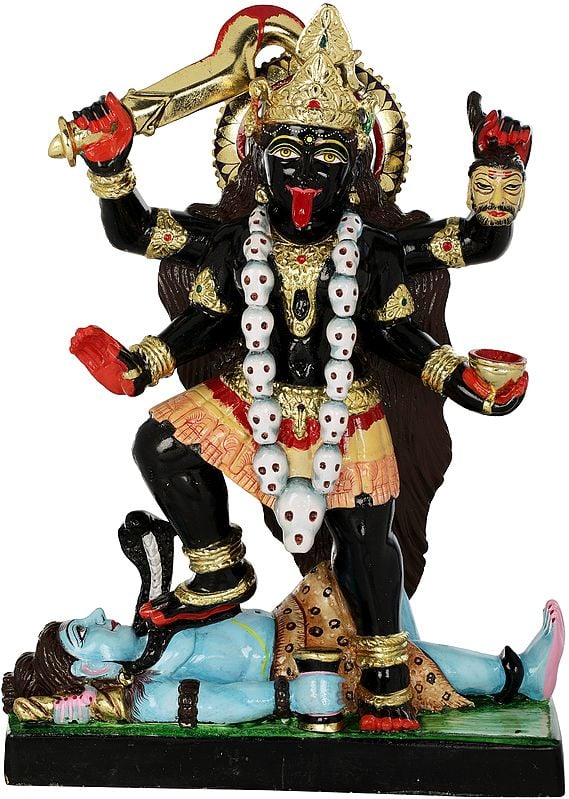 Goddess Kali – The Most Terrific Shakti

$1295
Quantity
Notify me when this item is available

Free delivery
This four-armed terrific figure, carved out of a fine-grained marble block, dark black, the stone’s natural colour, besides selective parts painted in blood-red, mainly her lolling tongue, palms, the soles of feet and cuts of severed heads, one held in one of her hands, and others worn as garland around her neck, obviously those of the demons she killed, palms smeared in blood when killing them, and feet, when moving around the blood-soaked battlefield, represents goddess Kali, the most extensively worshipped divinity of Indian masses, perhaps the monkey god Hanuman alone equaling. Even crude and unsophisticated sculpted by some unskilled local hand, an image of Kali is found enshrining an humble structure raised over a natural outcrop of earth by conically laid bricks, a couple of them or two, even in a far off tribal settlement not with ten hutments, in an uninhabited tract of forest or around a cremation ground,. Not belts like Bengal where Kali and Kali-worship are people’s principal deity and ritual, Kali is the most worshipped deity in every part of the country, from a rich man’s domestic shrine to a poor man’s hut, from a sage's seat to a dacoit's hideout.

As indicates excavated material, a fierce mother, protective but impatient, wrathful and destructive, in one form or other Kali seems to have been in worship even amongst aboriginal tribes much before the hierarchy of sophisticated gods emerged. It was perhaps in view of her immense popularity and divine power people attributed to her that she was inducted into Hindu pantheon and her image and a regular iconographic form began emerging. In the Devi-Mahatmya part of his Purana sage Markandeya, the earliest known and authoritative statement in regard to Devi-cult, perceived her as destroying, along with Mahalakshmi and Mahasaraswati, various demonic powers and helping maintain order. He does not talk of her anatomical form but as one carrying a large number of attributes he seems to have had in vision a goddess with multi arms. Subsequent Puranas, Agni Purana, Garuda Purana, Devi Purana, Bhagavata Purana among others, hence, perceived her as endowed with ten to eighteen arms carrying in them a wide range of weapons and other attributes.

Though Puranas subordinate Kali sometimes to Lord Shiva as his spouse, and sometimes to Durga as one of her aspects or inherent ‘Shaktis’ – powers, her awe-inspiring form and to a great extent her crudity were ever the same. These texts perceived her, and as invariably the medieval art represented, as the goddess with a repulsive wrinkled face, deep socketed eyes, boisterous laughter on lips, untidy body with age-worn skin, disheveled hair, devouring human limbs and drinking fresh blood, loitering around cremation ground and dancing on corpses. However unlike such multi-armed manifestations carrying in them various attributes of war, or too repulsive a form, this image of the goddess has been conceived with four arms carrying in one of them a ‘khadga’, a sword with a chopper like broad blade, in another, a decapitated head of a demon, also a bowl of blood. The fourth hand is just as gesticulated, bestowing boons on her devotees.

Immensely simplified, almost a normal human anatomy, as could justify the contention of being Shiva’s spouse, or just an aspect of Durga, albeit black-complexioned, otherwise the essence of her being as Kali – one who is black, and her blood-smeared body parts and sword, a decapitated human head in one of her hands and many more hung around her neck and a girdle of severed human hands on her waist, her figure has been conceived pursuing norms of human anatomy: a well-built body abounding in youthful vigour, large beautiful eyes, round face and womanly grace enshrining her entire figure. Though blood-anointed and hence discoloured, her hair is long scattered a thick sheet-like down the ankles, covering the entire back and hips and are beautiful. The girdle of severed human hands around her waist covers her like a girdle composed of beautiful lotuses. The wide spread Kali-cult contends that with her immense energy she overpowers Shiva which appropriately reflects in many of her visual manifestations that represent her, as here, as standing upon Shiva, an humble two-armed form carrying in one of them his ‘damaru’ – double drum, and in the other, a club-like attribute. Shiva pervades the cosmos, and Kali pervades Shiva, she hence pervades the cosmos and is the supreme divinity.